The vast majority of cancer patient deaths are due to the systemic dissemination of cancer cells throughout the body and the seeding and outgrowth of secondary tumors (metastases) in distant organs. One major objective of our research is the identification and characterization of the molecular pathways underlying the progression from differentiated benign tumor cells to invasive malignant cancer cells and to the seeding and outgrowth of metastasis in distant organs. Moreover, we have set out to delineate the genes and pathways that allow cancer cells to evade from current therapies. In addition to cultured tumor cell lines in vitro, we employ transplantation and transgenic mouse models of specific cancer types to determine causal connections between the expression of particular genes and the cellular changes during tumor progression, metastasis formation and therapy resistance in vivo.
In the past years we have learned that the development of malignant tumors is in part characterized by a tumor cell’s capability to overcome cell-cell adhesion and to invade surrounding tissue by a process referred to as epithelial-mesenchymal-transition (EMT). An EMT underlies the conversion of epithelial, differentiated cells to mesenchymal, migratory and invasive cells. EMT occurs in multiple stages and is regulated by complex molecular networks regulating the expression of a large number of proteins, lncRNA and miRNA-encoding genes. Using dual recombinase lineage tracing approaches in transgenic mouse models, we have noted that hybrid intermediate stages of EMT represent the stages of highest cell plasticity which confers cancer cells with hallmarks of cancer stem cells and increased metastatic traits and drug resistance. For example, we have found that breast cancer cells undergoing an EMT and exhibiting high cell plasticity can be therapeutically forced to differentiate into post-mitotic adipocytes, thus eliminating invasive cells and limiting metastatic seeding. Investigating the regulatory circuits defining cell plasticity, we have established the epistatic nature of a network consisting of transcription factors, miRNAs and lncRNAs which act as master regulators not only in the initiation and execution of the morphogenic process of an EMT but also in providing survival signals to cancer cells and thus allowing cancer cells to seed and grow metastases in distant organs. With these experimental approaches we have also identified novel signaling pathways and epigenetic events occurring during EMT, which have been subsequently scrutinized for their potential use as thera-peutic targets for preventing metastatic disease.
In a second line of research, we have investigated the molecular pathways underlying the development of evasive resistance to targeted cancer therapy. We have found that cancer cells shift from lethal autophagy during acute therapy to survival autophagy in therapy-resistant cells, thus overcoming cell death. Moreover, therapy-resistant cells appear to undergo a partial EMT and gain anti-oxidant activities which are critical in overcoming ferroptosis, a novel programmed cell death pathway involving reactive oxygen species and lethal lipid peroxidation. Finally, therapy resistant cells appear to shift their metabolism to glycolytic pathways. These pathways are specific for therapy resistant cells, and we have shown in preclinical experiments that they offer suitable therapeutic targets for overcoming resistance to conventional therapies.

The development of resistance to targeted cancer therapy (evasive resistance) has appeared a major obstacle in treating cancer. In two network projects connecting patient care (Markus Heim), biomedical research (Mike Hall, Biozentrum) and computational biology (Niko Beerenwinkel and Jörg Stelling, D-BSSE, ETHZ, Basel), we have aimed at the molecular dissection of the pathways underlying the development of drug resistance to current cancer therapy. We have employed drug-sensitive cell lines and their drug-resistant counterparts, novel mouse models of hepatocellular carcinoma (HCC) to identify some of the molecular pathways underlying evasive resistance and to test first alternative therapies to overcome it. These projects have been supported by a European Research Council (ERC) Synergy Grant and by a SystemsX.ch MTD Grant.
In a network project in collaboration with the Department of Surgery of the University Hospital Basel (Walter Weber) and basic and computational researchers of the DBM and the Friedrich-Miescher-Institute in Basel (Mohammed Bentires-Alj and Michael Stadler), the University of Zürich (Bernd Bodenmiller) and IBM Rüschlikon (Maria Rodriguez), we have addressed basic questions regarding breast cancer cell heterogeneity in patients and in experimental models and we have learned about the regulatory networks driving EMT and metastasis formation. This project has been funded by a SystemsX.ch MTD Grant. 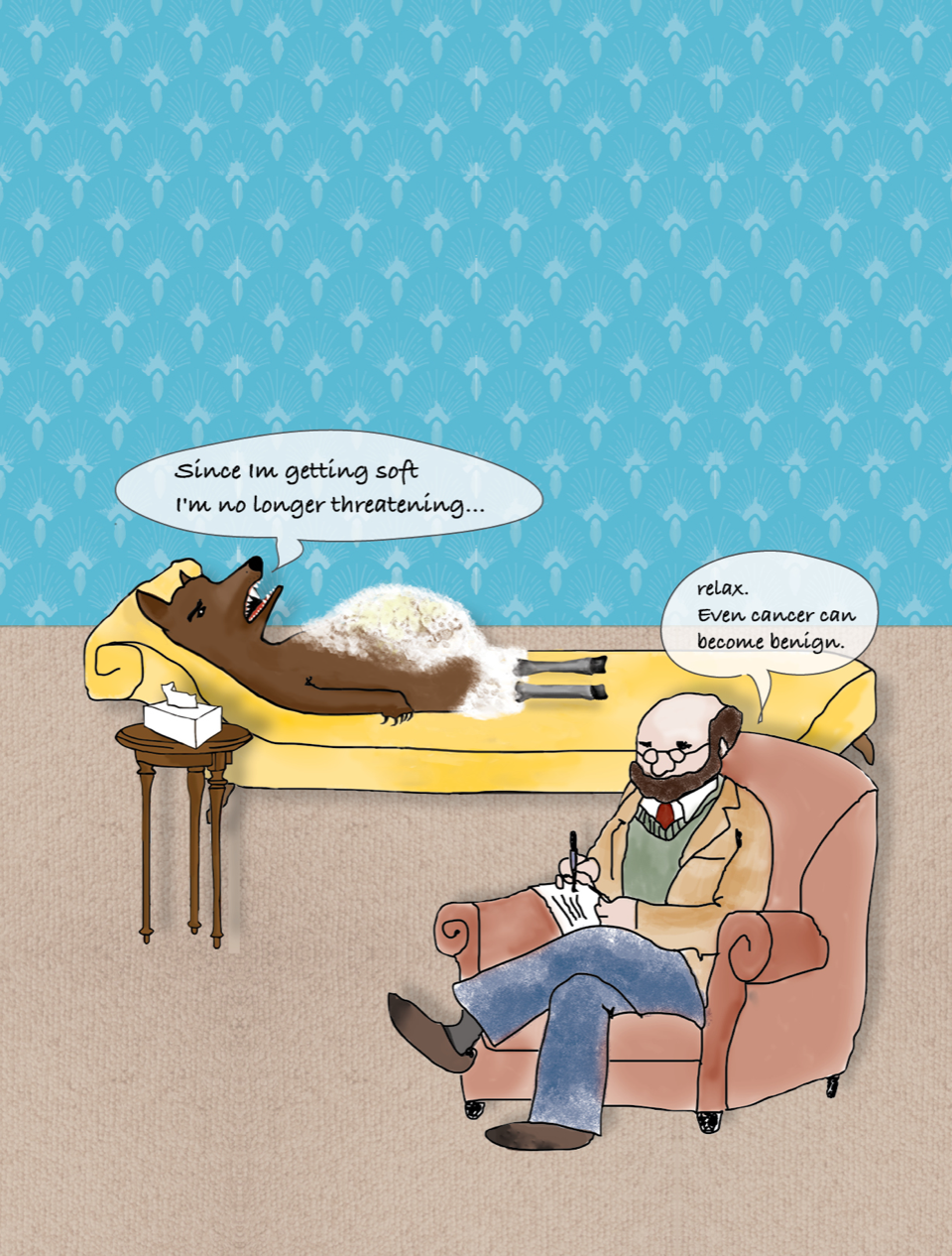 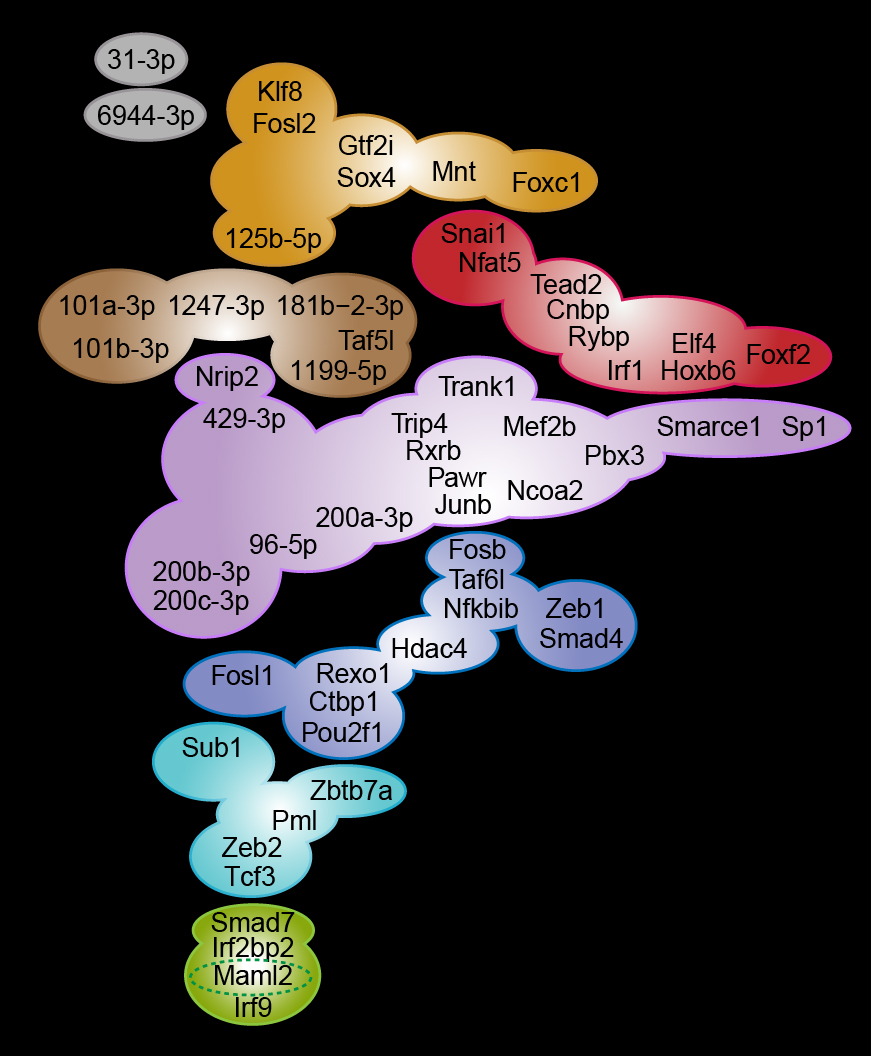 Fig. 2:Cloud model of the hierarchic regu-latory circuits driving EMT. The hierarchical landscape of the regulatory circuits steering an epithelial-mesenchymal transition (EMT) was identified using computational analysis by nested effects models (NEMs). Within these models, transcription factors and miR-NAs with similar effects were grouped in clouds and the factors in the top clouds have broader impact on EMT than the factors in the bottom clouds (see Mayer-Schaller et al., De-velopmental Cell, 2019). 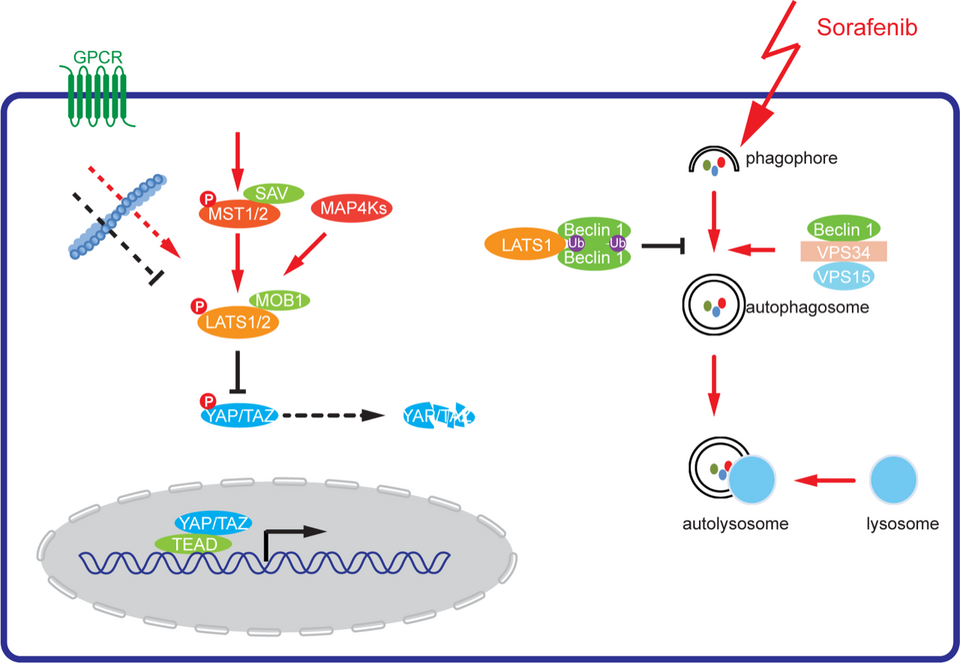 Fig. 3: Overcoming lethal auto- phagy underlies resistance to Sorafenib therapy of hepato-cellular carcinoma. Sorafenib treatment of hepatocellular carcinoma cells leads to lethal autophagy which is overcome by the Hippo signaling pathway effector kinase LATS1 in a kinase- independent manner. Schematic representation of the role of LATS1 in canonical Hippo signaling (left side) and of its non-canonical role in repressing sorafenib-induced autophagy (right). LATS1-induced K27-linked ubiquitination of Beclin-1 on K32 and K263 results into its inactivation by self-dimerization and thus to an inhibition of autophagy (see Tang et al., Nature Communications, 2019.