We are interested in unraveling the signaling pathways in ovarian physiology. For that reason, we focused much of our research on E3 ubiquitin ligase for inhibin B receptor, EULIR, which was originally identified in our lab as a putative mediator of inhibin signaling in the ovary. Later EULIR was renaimed HECTD1. In a transgenic mouse model with the HECT domain deletion mutant mice homozygous for Hectd1-mutant showed early embryonic lethality with abnormal placental development and defective of neural tube closure resulting in exencephaly. The thickness of the placenta of both Hectd1-mutant homozygous and heterozygous mice was distinctly thinner than that of wildtype mice, the difference being most pronounced in the labyrinth layer of the placenta (Fig. 1). Moreover, as an E3 ubiquitin ligase, many aspects of the functional role of HECTD1 still remain to be eluci-dated. By Y2H and MS assays, the HECTD1 interactome network was generated. HECTD1 regulates the protein level of IQGAP1 through ubiquitination and therefore mediates cell spreading and directionality of migration by regulating the dynamics of the focal complexes, especially determining paxillin and zyxin localizations. HECTD1 also regulates the expression of SNAIL and epithelial mesenchymal transition (EMT). The knockdown of HECTD1 in HeLa cells increased cell migration and induced a mesenchymal phenotype, in addition to demonstrating sustained EGF/R signaling, which was observed through increased phosphorylated ERK expression levels. We found that the sustained signaling of EGFR is accompanied by co-localization of Rab4 together with APPL1, another HECTD1 effector. We identified APPL1 as a critical player during fast recycling endosome biogenesis, in which APPL1 is not only a marker of the very early endosome but plays a crucial role in early endosome sorting. Mechanistically, we demonstrated that APPL1 is essential for the recruitment of KXD1 to the Rab5-Rab4 endosomes. BLOC-1 is required for RAB4 fast recycling. APPL1 establishes a network of interactions with RAB5, BORC/BLOC1 and RAB4 for fast endosome recycling (Fig. 2). Regulation of membrane transports by HECTD1 has other samples. Hax1 is an effector of HECTD1. Centrosomal recruitments of Mob1 and Nek2 are required by Hax1 to regulate the function of Mst1/Mob1-NDR and Mst1/Nek2 at the centrosome. Hax1-Sav1–Mst1–Mob1/HDR1 and PLK4 cooperate in centrosome amplification. 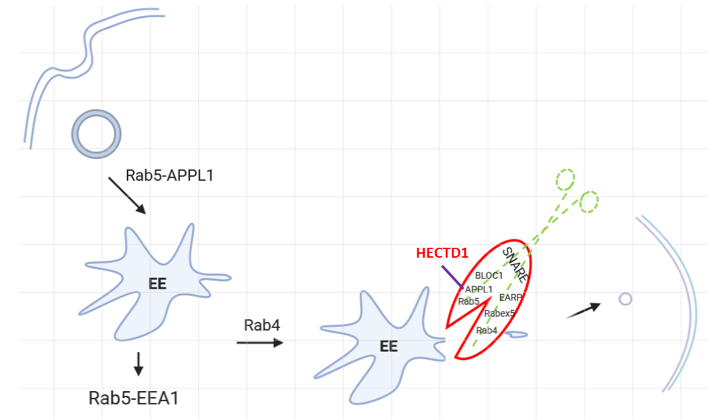