Internal states define sensory perception and actions. For example, we are more alert after a loud bang or lose focus during states of hunger. Brain states are associated with neuronal circuits in cortex. However, the behaviors that are affected by internal states are complex and result in diverse actions including changes in autonomic and hormonal responses. We studied how the amygdala – a center for the regulation of emotional states, associative learning as wells as complex behavior like social interactions – encodes internal states. We hypothesized that states are most likely not encoded on the level of individual neurons but by orchestrated changes in large neuronal populations. To measure activity of large populations of amygdala neurons we used novel miniaturized microscopes in freely moving mice (Fig. 1). This allowed us to longitudinally image neural activity across a series of behavioral paradigms in different contexts across multiple days. We found that two large ensembles of amygdala neurons signaled antagonistic information about an animal’s behaviour in an open field context. This signature of neuronal population activity was slow and occurred across consecutive days and paradigms and predicted transitions between exploratory and defensive states in a moment-to- moment fashion (Fig. 2). During fear conditioning, an aversive associative learning paradigm, amygdala population activity to sensory stimuli was orthogonal to state coding. This shows that fast sensory representations in the amygdala and slow state dynamics are separately represented. These state signals are sent to a wider brain network, including cortical and subcortical areas and might be crucial for normal brain function. Future studies can now use this population signature and investigate if amygdala state coding is affected in animal models of neuropsychiatric diseases (Gründemann et al., 2019).

Cortical as well as limbic brain areas like the amygdala are classically regarded as centers for associative learning. In a recent study, we investigated how thalamic sensory neurons, which are upstream of the amygdala, shape plasticity upon associative fear learning. Using our miniature microscope approach, we recorded activity patterns of large numbers of auditory thalamus neurons in freely moving animals during fear conditioning. On the single cell level, we find that individual neurons exhibit mixed selectivity and respond to tone and foot shock. Furthermore, single cells exhibit heterogeneous plasticity patterns to auditory and aversive stimuli upon learning (Fig. 3). This plastic change in activity is particularly intriguing given that auditory thalamus is supposed to be a reliable relay of sensory information. However, contrasting individual cells, we find that the encoding of auditory stimuli remained stable across days on the level of the total neural population. These findings suggest that auditory thalamus is more than a sole sensory relay and balances experience-dependent, diverse single cell plasticity with stable ensemble level encoding of the sensory environment to support perception (Taylor et al., 2020).

Malfunctions of sensory integration like false (or “phantom”) representations can result in detrimental behavioural outcomes. Higher brain areas are involved in computation, storage and retrieval of these sensory representations. However, how multisensory information flow to these areas is integrated, preprocessed and routed in subcortical circuits remains elusive. In our ongoing work, we are in-terested in how the brain, and particularly early thalamic relays, integrate sensory inputs from different sensory modalities, e. g. vision and audition to generate behavioural gains. To address this question, we combine state of the art circuit neuroscience tools like opto- and pharmacogenetics with single and two-photon imaging techniques to reveal computational frameworks of multisensory integration in deep brain areas and their effects on behaviour and learning.

Fig. 1: Miniature microscope imaging of amygdala neurons. A) Schematic of the miniature microscope (left). A gradient-refractive index lens is used to relay light to the amygdala (right). B) Expression of the GCaMP neural activity sensor in the amygdala (left, overview). GCaMP is a [Ca2+]-sensitive fluorescent protein which allows the measure-ment of neuronal activity. High magnification confocal image of GCaMP-expressing amygdala principal neurons. Modified after Gründemann et al., 2019. 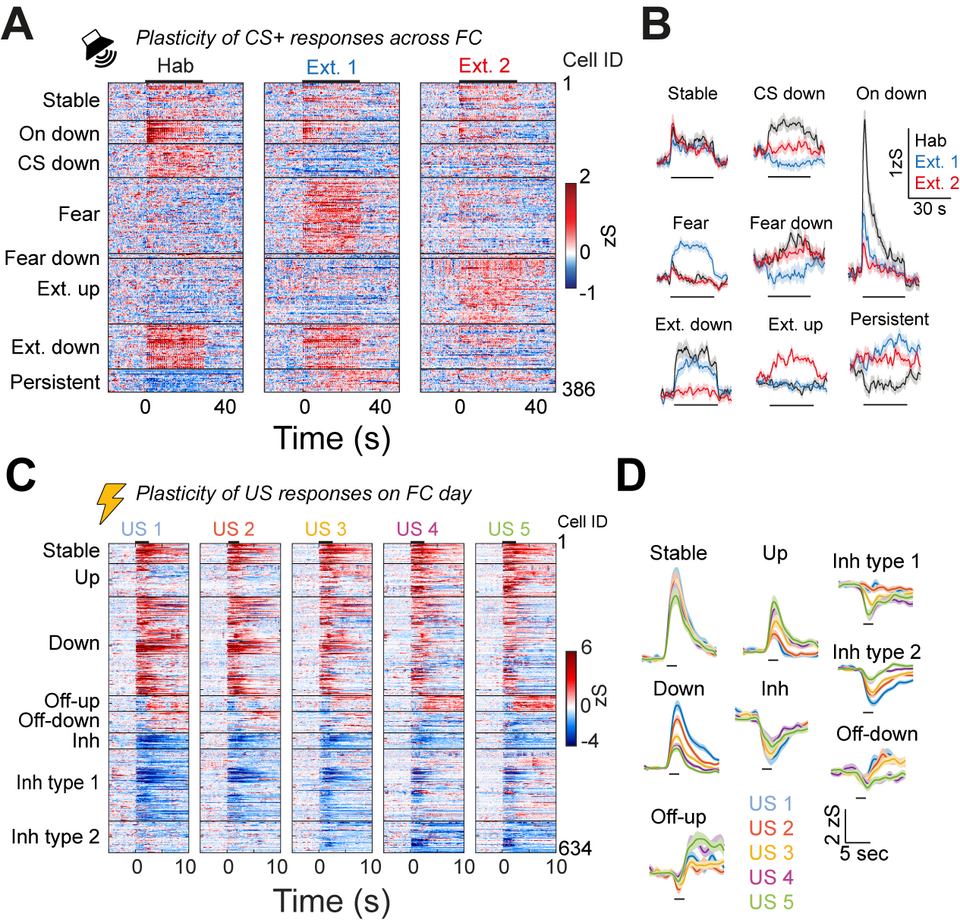