Human pregnancy is associated with a mild pro-inflammatory state, characterized by activation of circulatory neutrophils. We have previously shown that this is disturbed in pathologies such as preeclampsia, leading to excessive neutrophil extracellular trap (NETs) formation. NETs are a rather unique innate immune tool employed by granulocytes, whereby their nuclear DNA is extruded into the extracellular environment to ensnare and kill a wide-array of microorganisms, ranging from bacteria, fungi to parasites. Aberrant NETs formation may damage or induce cell death of surrounding tissues, and is implicated in a number of pathologies including rheumatoid arthritis (RA), SLE, small vessel vasculitis, or coagulopathies.The underlying signal transducing pathway initiating the NETotic process involvescalcium mobilization, generation of ROS by NAPDH oxidase, nuclear localization of both neutrophil elastase (NE) and myeloperoxidase (MPO), and citrullination of histones by peptidylarginine deiminase 4 (PAD4). The latter events contribute tochromatin unfolding, a prerequisite for efficient DNA extrusion.
To date no study has examined NETs generation in normal pregnancies, nor which factors could modulate such a response during extensive period of human gestation. For this reason we recently examined NETosis in all three trimesters of normal pregnancy. Our data indicate that neutrophils from normal healthy pregnancies exhibit a distinct pro-NETotic phenotype, which increases towards term. This was characterised by an elevated response to pro-NETotic stimuli, as well as clear elevations in the expression of key signalling components required for efficient NETs formation.
In our studies to ascertain which factors drive this phenotypic change, we determined that G-CSF, the circulatory levels of which also increase in parallel during pregnancy, plays a key role in promoting a progressively enhanced NETotic state.We also noted that early in gestation (1st trimester), NETosis is augmented by the action of human chorionic gonadotropin (hCG), which boosts the action of G-CSF,in promoting a primed pro-NETotic phenotype.
As pregnancy advances, and the levels of hCG subside to be replaced by other steroid hormones expressed by the placenta, namely estrogen (E2) and progesterone(P4), we observed that maternal neutrophil activity is modulated in a considerably more complex manner. In this regard, E2 acts by being pro-NETotic. This action is antagonized by the action of P4, which serves to retain neutrophils in a highly primed state, yet hindering NETs formation. Our data suggest that the regulatory mechanism evoked by P4 involves a blockage of NE localisation to the nucleus,a step previously shown to be vital for efficient NETs formation. Since neutrophilNETs were originally described as an anti-pathogenic mechanism, our data would suggest that this operative arm of the innate immune response is highly pro-activein human pregnancy. In this manner, by being in a highly primed pro-NETotic state,such pre-activated neutrophils could react immediately to a pathogenic threat. Our data also provide new insight into how aberrancies in this system may contribute to the underlying aetiology of preeclampsia, in that this condition is associated with elevated levels of hCG and G-CSF, which would serve to enhance NETosis.Since there are suggestions that progesterone levels may be reduced in preeclampsia, such an imbalance may trigger an enhanced pro-NETotic response, which is exacerbated by the occurrence of inflammatory placental micro-debris,abundant in this condition.
On the other hand, our data may provide a novel insight into autoimmune conditions such as systemic lupus erythematosus, which is associated with reduced levels of progesterone, both during the menstrual cycle, as well as during pregnancy. Since NETosis is altered in SLE, it is possible that the negative feedback loop hindering NETs formation provided by progesterone contributes to the preeclampsia-like symptoms frequently observed in pregnant women affected by SLE. These facets are being examined in ongoing studies, together with the Prof. P. Hasler, Aarau 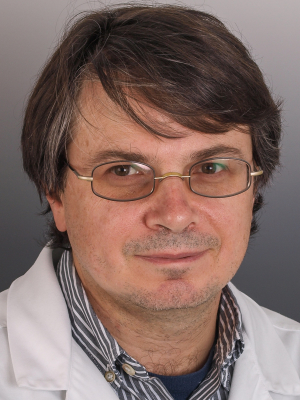 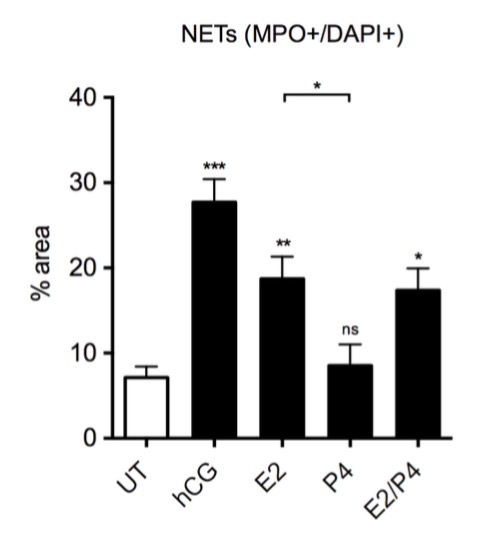 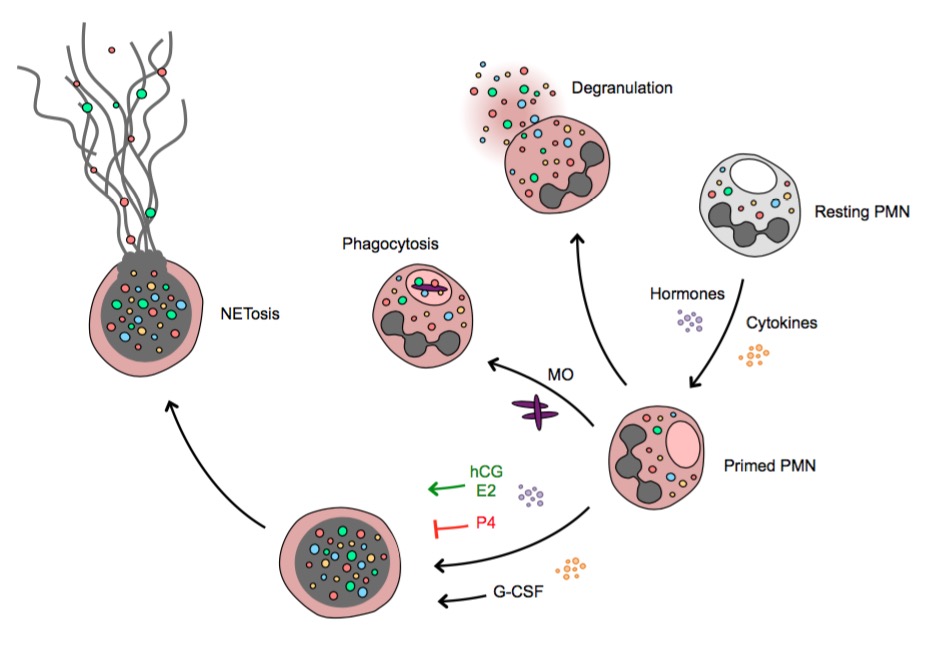 Fig. 3: Progesterone antagonises the estrogen and GCSF driven neutrophil extracellular trap formation during pregnancy. During pregnancy neutrophils lie under the increased influence of cytokines, e. g. G-CSF, and sex hormones. This specific milieu appears to poise the neutrophils in a stable pro- NETotic primed state. Depending on the stimulus, for instance microorganisms (MO), neutrophils react by phagocytosis or degranulation. When a different NETotic stimulus is present, such as excessive placentally derived plasma microparticles (MP) in preeclampsia (25), primed neutrophils react with overt NET release. Pro-NETotic combinations of hormones and cytokines are given in green, the most potent in bold green. Inhibitory combinations are given in red, the most potent in bold red.