Our lab is mainly engaged in the investigation of toxicological mechanisms of drugs and other chemical compounds on the liver, skeletal muscle and on the heart. During the last 3 years we published reports mostly in the fields of statin-associated myo- and cardiac toxicity and of hepatotoxicity associated with different drugs such as dronedarone, benzbromarone and flucloxacillin. All of these drugs are idiosyncratic toxicants; adverse effects are rare and appear at therapeutic doses,and only in patients with susceptibility factors. Principle aims of our studies are to understand the mechanism of toxicity and, based on the mechanism, to propose and investigate potential susceptibility factors.
Regarding statins and myotoxicity, we have shown that statins inhibit the AKT/mTOR pathway in C2C12 cells but also in vivo in mice. As a consequence, skeletal muscle protein synthesis is impaired, muscle breakdown is upregulated by induction of atrogin-1 and apoptosis of myocytes is increased. The reasons for the inhibition of AKT phosphorylation are inhibition of signaling across the IGF-1 receptor and inhibition of the activation of mTORC2. The IGF-1 receptor is N-glycosylatedand N-glycosylation is impaired by statins. We have shown that in C2C12cells, but have obtained similar findings in the heart and in skeletal muscle of mice treated with statins. In additional projects we could confirm that statins are mitochondrial toxicants and that they are associated with mitochondrial ROS production in cultured cells, mice and also in skeletal muscle of humans. Future studies will focus on answering the question why statins inhibit activation of mTORC2 and on the molecular mechanisms of insulin resistance associated with statins. Since insulin uses the same intracellular signaling pathway like IGF-1, it can be assumed that similar mechanisms are responsible for statin-associated insulin resistance.Furthermore, we are going to study the effect of impaired mitochondrial proliferation(using PGC1-α and PGC1-β knock-out mice) as a risk factor for statin-associated myopathy. Finally, we plan to investigate the mechanisms of statin-associated liver injury.
A second field of interest is the mechanism of hepatotoxicity associated with specific drugs. For that, we have studied the effects of benzbromarone and dronedaroneon isolated liver mitochondria, on human liver cell lines and primary hepatocytes and in mice in vivo. Benzbromarone and dronedarone are mitochondrialtoxicants which inhibit the function of the electron transport chain and ofβ-oxidation. In vivo, dronedarone was more toxic in mice with a defect in mitochondrialβ-oxidation than in the corresponding wild type animals. This suggests that impaired mitochondrial β-oxidation may be a susceptibility factor for dronedarone-associated liver injury. Interestingly, dronedarone and benzbromarone breakup the mitochondrial network, leading to fragmentation of the mitochondria (mitochondrial fission, see Fig. 1 and Fig. 2). They are also associated with increased mitochondrial production of ROS. Future studies will focus on the consequences of ROS production on the antioxidative defense system (Nrf2 activation and downstream reactions) and on the consequences of mitochondrial fission (increased mitophagy). Defects in activating the antioxidative defense system and/or in mitophagy could represent susceptibility factors for toxicity. This possibility will be tested in engineered cells and in mice. We will expand our research also on tyrosine kinase inhibitors, which are known mitochondrial toxicants.
Our studies show that, in contrast to what is written in many textbooks, it is possible to find mechanisms for idiosyncratic toxicity. This allows identifying susceptibility factors with the final aim to prevent this type of toxicity in patients. 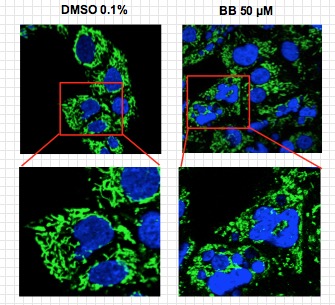 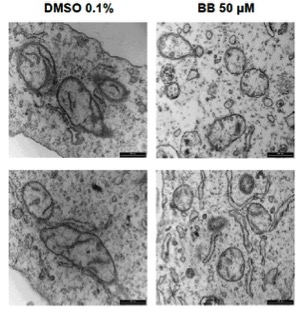