Our research interest is to understand the role and mechanism of cell-to-cell spreading of toxic proteins in neurodegenerative protein misfolding diseases In neurodegenerative diseases the nervous system gets progressively altered. Impaired structure and function, which is due to degeneration of neural cells, results in severe behavioral disabilities and often death of the patient.
Protein misfolding diseases (PMDs) are a class of neurodegenerative disorders,in which disease pathogenesis is accompanied by the deposition of β-sheet-richamyloid aggregates. In each PMD, aggregates are composed of specific misfolded proteins, such as Aβ (amyloid-β) and tau in Alzheimer’s disease, α-synucleinin Parkinson’s disease, huntingtin in Huntington’s disease, superoxide dismutase1 (SOD1) in amyotrophic lateral sclerosis (ALS) and TAR-DNA binding protein 43(TDP-43) in ALS and frontotemporal lobar dementia (FTLD) and the prion protein(PrP) in prion disorders. These proteins have little in common, other than showing abnormal folding and aggregation. Pathological lesions in PMDs typically startin disease-specific brain regions from where the pathology progressively spreads throughout the brain in patterns that match functional neuronal connectivity. It was first recognized in prion disorders that this stereotypic spreading is due to transneuronal propagation of the pathogenic form of the PrP (PrPSC or PrP scrapie). A series of exciting new studies have now provided strong experimental evidence that a ‘prion-like’ self-propagating mechanism is applicable to a variety of disease-linked proteins, including tau, α-synuclein, huntingtin and tdp-43. Furthermore,recent work suggests that the spreading of these pathogenic proteins, like the spreading of pathological lesions, follow disease-specific patterns and neural networks that resemble the architecture of functional synaptic connectivity in the healthy human brain. The spreading of misfolded proteins is therefore likely a common feature of neurodegenerative PMDs and might be an important contributor ton on-cell autonomous neuronal damage. However, many aspects of this process remain unknown including its contribution to disease progression and the underlying molecular mechanisms. This hampers the discovery of potential novel therapeutics in PMDs, for which so far no effective treatments exist.
Therefore, the aim of our studies is to understand whether toxic protein spreading is a fundamental trigger for the onset and a key factor for the progression of neurodegeneration.We want to understand the role neuronal connectivity plays in this process and elucidate the underlying cellular/ molecular pathways involved in the spreading of toxic proteins. Initially Huntington’s disease is used as a model disease,but the ultimate goal is to know whether toxic protein spreading is a disease pathway shared by Alzheimer’s disease, Parkinson’s disease, ALS and many others. As revealing the existence of a common disease pathway would create theunique possibility to develop the same or a similar therapeutic strategy for all these devastating illnesses.
We will approach the above questions by using a combination of genetic mouse models, patient-derived human induced pluripotent stem cells, molecular biology tools, imaging, optogenetics and electrophysiology to reveal:

This is done in state-of-the art in vitro and in vivo experimental designs, includingco-cultures of mouse organotypical brain slices with human stem cell-derived neurons to address disease specific questions in a human related context. 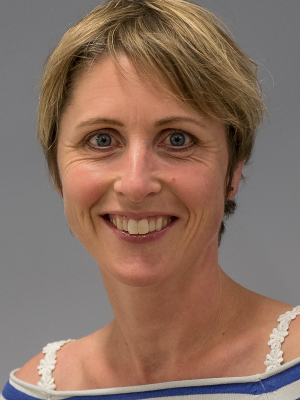 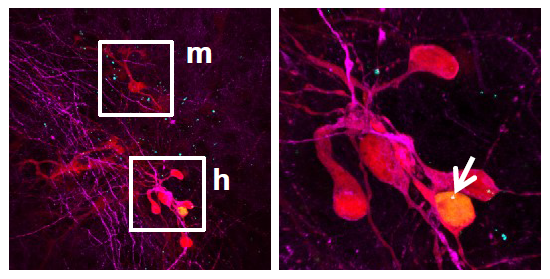