Calcium is a universal second messenger regulating different biological functions from muscle contraction, to gene transcription and cell death. In skeletal muscle,Ca2+ regulates contraction and relaxation and alterations in its intracellular concentration can lead to neuromuscular disorders. Investigations carried out during the past decade have shown that in more than 50 % of the cases, Central Core Disease, Multiminicore disease and Malignant Hyperthermia are linked to point mutations in the gene encoding the skeletal muscle sarcoplasmic reticulum calcium release channel ryanodine receptor (RyR1).
There are three isoforms of RyR that are expressed in different tissues; type 1 is preferentially expressed in skeletal muscles but recent data has shown that it is also expressed in some areas of the central nervous system, in some immune cells and in smooth muscle cells. These results imply that mutations in RYR1 may lead to alterations of Ca2+ homeostasis not only in skeletal muscle, but also in other tissues expressing this intracellular calcium release channel. Indeed ryanodinopathies have recently been implicated in other clinical conditions such as bleeding disorders, sepsis and intensive care polyneuropathy, broadening the clinical spectrum of disorders linked to altered RyR1functions. Interestingly, type 3 RyRwhich was reported to be expressed at low levels in many tissues, appears to be the predominant isoform in extra ocular muscles and we are currently investigating its role in this group of muscles, by using a RYR3 KO animal mouse model.
Our research also focuses on different aspects of calcium regulation in skeletal muscle under normal and pathological conditions and on the identification of pathomechanisms in congenital muscle disorders. While most dominant RYR1mutations affect Ca2+ homeostasis by changing the biophysical properties of theRyR1 Ca2+ channel, the mode of action of recessive RYR1 mutations is more elusive,especially since at the level of myotubes, effects on Ca2+homeostasis are not prominent. On the other hand, striking changes occur in the patient's muscles. Such changes include a drastic decrease of RyR1 protein content, depletion of muscle specific miR-1 and 1-133, as well as depletion of miR-22 and -124 that specifically bund to the 3'UTR of the human RYR1, hyper-methylation of RYR1 CpG island and increased content of HDAC-4 and HDAC-5.
In order to gain insight into the mechanisms causing the epigenetic modifications and validate whether they represent valid pharmaceutical targets we have generated two mouse models harboring RYR mutations, using the CRISPR/Cas9 gene editing technology. The mutations we chose were originally identified in a severely affected patient with Multiminicore disease who harbored a premature stop codon inexon 36 (RyRGln1970X) and a mis sense mutation in exon 91 (RyRAla4329Asp). Extensive biochemical, physiological and cellular characterization of the mice modelscarrying single heterozygous and compound heterozygous mutations will help identify biomarkers that could be used to monitor disease progression or regression in patients. Of importance, similar epigenetic modifications may occur in the muscles of patients affected by other congenital myopathies (nemaline, myotubular and SEPN1-related myopathies). Thus discovering a common pharmacological target downstream the primary genetic defect could potentially benefit a large number of patients.
Other important areas of research focus on the role of calcium influx in skeletal muscle excitation contraction coupling as well as characterizing the role of SRP-35, a 35 kDa retinol dehydrogenase present in skeletal muscle sarcoplasmic reticulum.For the latter experiments we have created a transgenic mouse model over-expressing SRP35 in skeletal muscle. Such mice show increased exercise performance and increased glucose metabolism. We think that this model will offer important insight into the identification of molecular components coupling muscle activity to metabolism and may help identify potential molecular targets for the treatment of age-associated dismetabolic disorders such as type 2 diabetes. 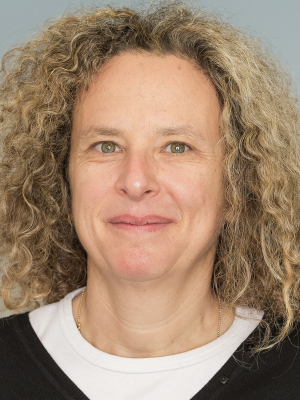 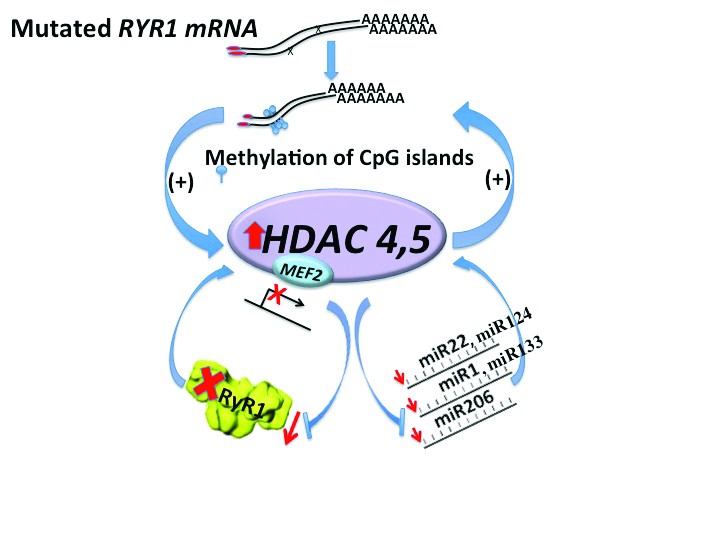 Fig. 1: Cartoon depicting how mutations in RYR1 lead to a decrease in RyR1 content thereby leading to weak muscles. Mutations lead to DNA hyper-methylation and HDAC-4/HDAC-5 over-expression. This causes mef2 sequestration thereby inhibiting transcription of genes regulated by mef2, including the RYR1 and muscle-specific miRs. A decrease in RyR1 would severely affect muscle excitation-contraction coupling since this calcium channel is a central player in this mechanism, releasing the calcium necessary for muscle contraction from the sarcoplasmic reticulum. 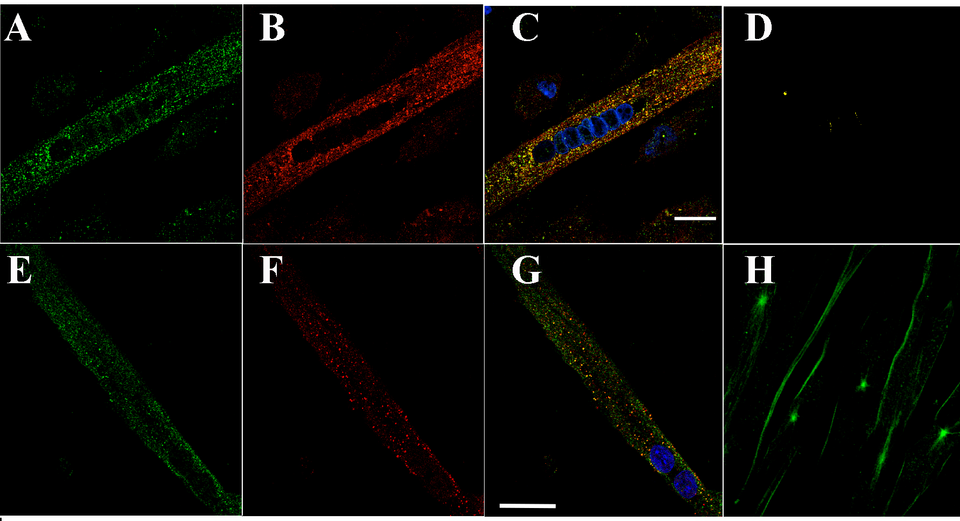