Dendritic cells (DCs) are a specialized immune subset dedicated to the sensing of pathogens and the induction of the appropriate immune response. Under steady state conditions DCs can be subdivided into conventional DCs (cDCs) and plasmacytoid DCs (pDCs). cDCs are specialized in antigen uptake and presentation to naïve T cells and can be further subdivided into IRF8- and IRF4-expressing cDC1 and cDC2, respectively. pDCs are a distinct lineage dedicated to the production of high amounts of type I IFNs in response to viral infections. Development of DCs occurs in the bone marrow (BM) and requires a complex transcriptional network, where progressive lineage specification gradually limits and excludes alternative fates. A common DC progenitor (CDP) able to give rise to both cDCs and pDCs, had been identified in the BM. However, while cDCs arise in the periphery, mature pDCs are present in BM suggesting that their development is accomplished before entering the circulation.
Furthermore, the evidence that CDPs can generate pDCs and cDCs at a clonal level is conceivable with a pre-determined and cell-intrinsic transcriptional induction of lineage specification, already at the CDP stage. In recent years precursors of cDC1 and cDC2 were identified, as several TFs involved in their commitment. However, the molecular mechanisms leading to DC-lineage specifications are still unclear. Moreover, the evidence that both hematopoietic branches, namely the lymphoid via CLP and the myeloid via CMPs, can both give rise to DCs has further complicated our understanding of their ontogeny. In order to characterize the developmental pathway of DCs and in particular of pDC we searched for a committed precursor. The expression of the E protein Transcription factor 4 (TCF4), also referred as E2-2 was shown to be essential for pDC development and identity, however the exact stage at which this TF is expressed is unclear. The requirement for this TF for pDC development appears shared across species as in humans haploinsufficiency, referred as Pitt-Hopkins syndrome, results in impaired pDC besides mental retardation and cranio-facial dysmorphia. It was hypothesized that development of pDCs and cDC1 is regulated by the expression and mutual inhibition of TCF4 on pDCs and the inhibitor of DNA binding 2 (ID2) on cDC1, respectively. Further, the zinc finger E box–binding homeobox 2 (Zeb2) was recently identified as key regulator of early DC development as Zeb2 deficient mice have reduced pDCs, and increased cDC1. The proposed mechanism of action suggested repression of ID2 by ZEB2.
However, while this molecular regulation is compatible with the pDC phenotype observed in Zeb2 deficient mice, it does not explain Zeb2 transgenic mice, which have unaltered pDCs and reduced cDC1s. Collectively, these results suggest a dual origin of pDCs, where the requirement for TCF4 and ZEB2 is lineage as well as stage specific. A CDP independent origin for pDCs is further supported by the evidence that the pool is only partially reduced in Itgax-cre but totally absent in Mx1-cre conditional deficient mice. Given the complexity of the transcriptional interactions happening at different stages during DC commitment, and the possible developmental convergence into one phenotypically unique lineage, we decided to explore in depth the paths leading to pDC and cDC development. Contrary as previously hypothesized, we could recently show that pDCs mostly develop from CLPs and not CDPs. Within the BM we were able to dissect the progressive stages that lead to the formation of mature pDCs. The expression of SiglecH and Ly6D identifies on IL7Rexpressing bone marrow precursors pre-pDCs. At this stage high expression of IRF8 appears to be essential to promote pDC lineage specification through the induction of TCF4, while we hypothesize that within the immediate upstream progenitor expression of EBF1 leads to the induction of TCF3 along the B cell pathway (Figure 1). Single cell analysis of mature pDCs within BM and Spleen also highlighted heterogeneity within the pDC compartment leading to the identification of a new subset referred as pDC-like cells. This subset is present as a small fraction of cells that fall within the pDC gate but appears to share hallmark features not only with pDCs but also cDCs. Recent evidence has shown the presence of this subset also within the peripheral circulation of healthy donors. It appears that pDC-like cells are an immature cDC-progenitor subset capable of differentiating upon activation in efficient cDCs. The functional properties of pDC-like cells as well as their differentiation capacity remain to be investigated. 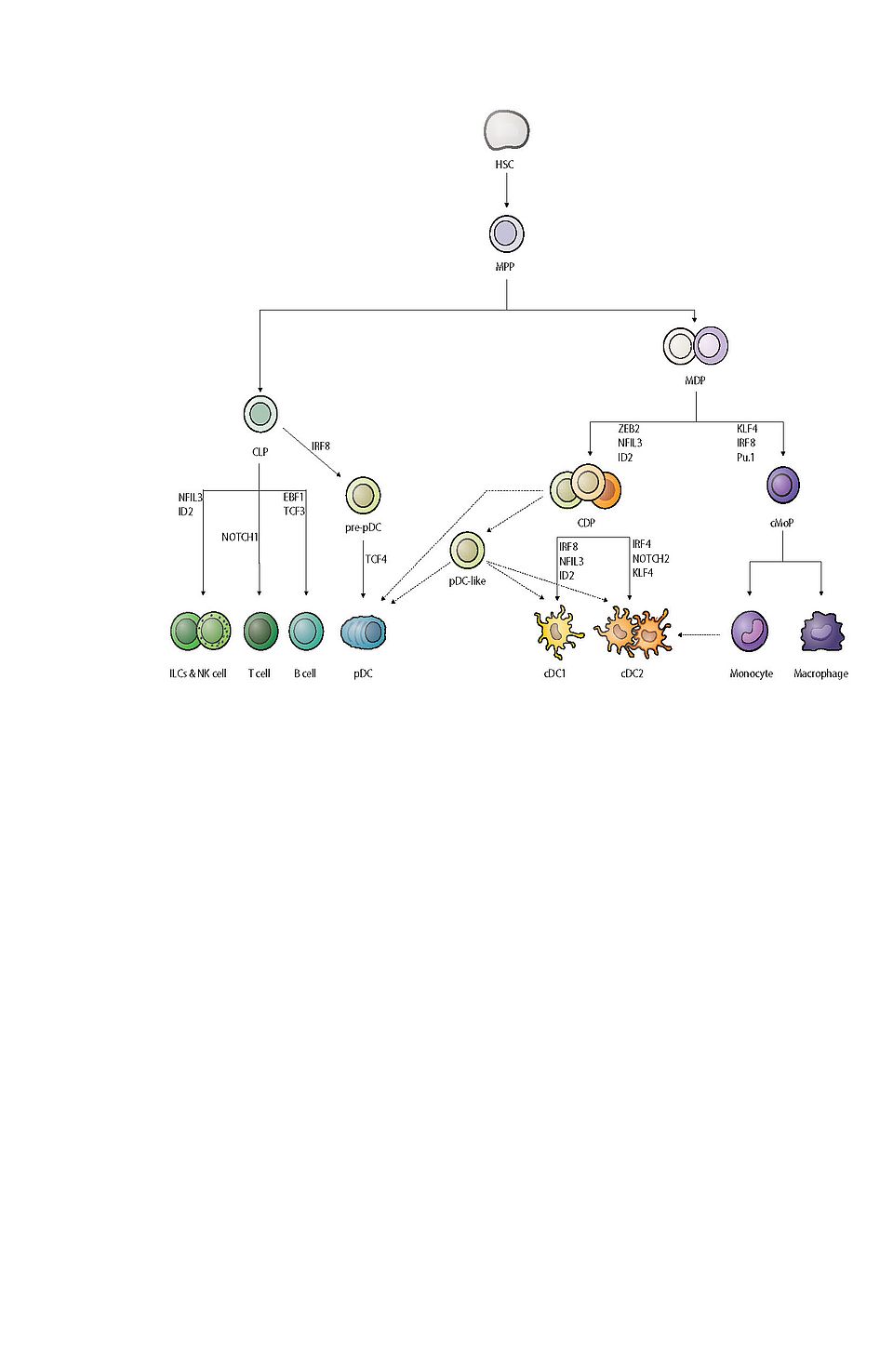 Fig. 1: pDC and DC Differentiation. Shown is the newly suggested model for pDC and cDC differentiation with the relevant transcription factors.