The thymus is the anatomical site where T cells are generated and instructed to provide protective immunity against pathogens whilst ignoring the individual’s own tissues. Thymic epithelial cells (TEC), an essential component of the organ’s 3-dimensional scaffold, attract T cell precursor from the peripheral blood, foster their differentiation in a bespoke micro-environment, and help to select developing T cells based on their antigen specificities. Based on their distinct structural, phenotypic, and transcriptomic features, TEC are differentiated into distinct subtypes which anatomically define them as either cortical (c) or medullary (m) subpopulations (Figure 1). cTEC are instrumental in committing hematopoietic precursors to a T cell fate and in selecting cells with a T cell receptor (TCR) capable to interact with an individual’s antigen presenting cells. mTEC express collectively an almost complete repertoire of an individual’s protein coding genes and thus create a library of self-peptides essential for the induction of T cell self-tolerance. This unique ability is achieved by a yet incompletely understood process of promiscuous gene expression of peripheral tissue-specific antigens that is unique to a subpopulation of mTEC.
The research of the laboratory of Pediatric Immunology seeks to detail the genetic and epigenetic control of TEC development and function combining multi-parameter flow cytometry, advanced histological and molecular methods and transcriptomic analyses at both population level and single cell resolution. Recent and ongoing experiments focus on:

— The complexity of the TEC lineage development. Using single cell transcriptomic analysis of TEC across the life course of mice, we identified at least 9 separate TEC subtypes and demonstrated that TEC progenitor cells are the principal targets of ageing (Figure 2). Specifically, an early-life precursor cell population present in the cortex postnatally is virtually extinguished at puberty. Concomitantly, a medullary precursor cell quiesces, thereby impairing maintenance of the medullary epithelium. Hence the quiescence of TEC progenitors is a major factor underlying thymus involution and affects thymic regeneration and the preservation of central immune tolerance.

— The epigenetic control of TEC development and function. We showed that interference with DNA methylation, histone modifications or miRNA generation profoundly impairs TEC and consequently also overall thymus biology including organ size, TEC differentiation and function embracing the capacity to maintain a broad repertoire peripheral tissue-specific antigens. Interestingly, some of these changes are only apparent in adult mice thus revealing a differential dependence of perinatal and adult TEC on epigenetic regulatory mechanisms.

— The relevance of metabolism on TEC function. We found that modifications in the homeostasis of adenine nucleotides imparts significant quantitative and qualitative changes in the compartments of both cortical and medullary TEC. These alterations include changes in mitochondrial mass and superoxide production and are apparently paralleled by deviations in TEC differentiation and thymopoietic function.

— The role of Lin28 for TEC development and function. The RNA binding protein Lin28 regulates miRNA biogenesis and serves as a gatekeeper controlling the transition between pluripotency and committed cell lineages. Adult mice in which Lin28 overexpression was targeted to TEC failed to achieve a regular thymus size and showed defects in cTEC differentiation and consequently positive and negative thymocyte selection. Remarkably, these defects are not apparent in young mice hence demonstrating a differential susceptibility of perinatal and adult cTEC to Lin28 controlled RNA biology. 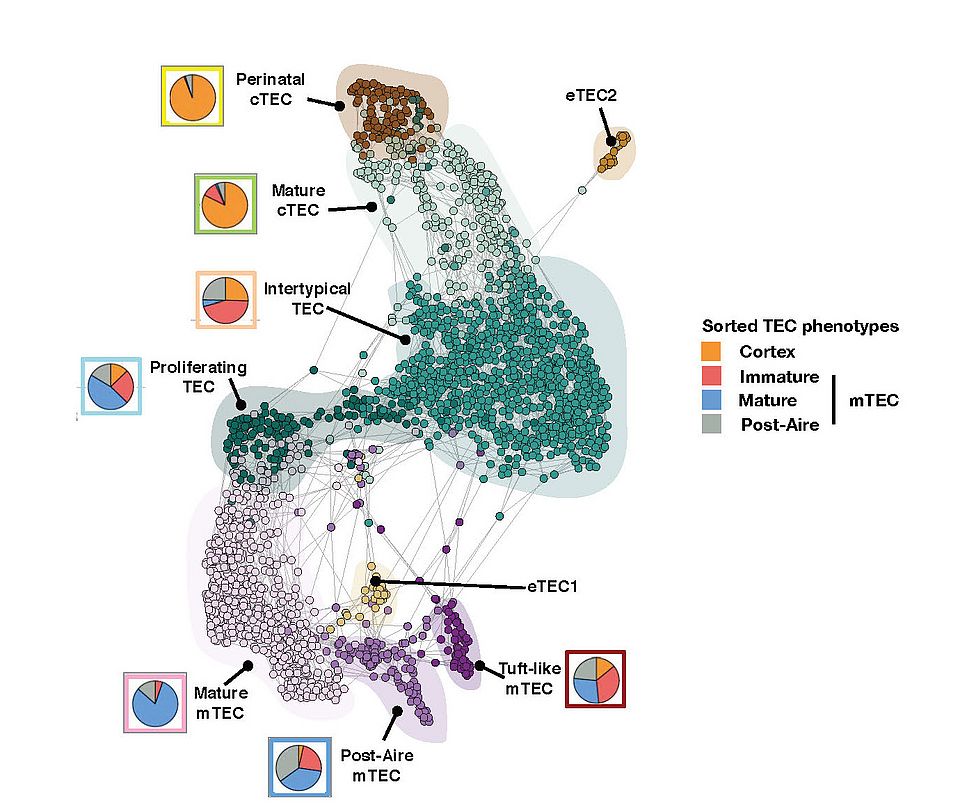 Fig. 2: A SPRING-layout of the shared nearest-neighbour graph of single TEC, derived from scRNA-seq transcriptional profiles. Cells are coloured by a clustering that joins highly connected networks of cells based on a random walk. Clusters are annotated based on comparisons to known TEC subsets and stereotypical expression profiles. Coloured circles show the representation of flow cytometrically defined TEC subpopulations within each transcriptionally defined TEC subset.