How an embryo develops from a single cell – the zygote – is one of the most fascinating biological processes. Recent research has uncovered the amazing self-regulatory properties of the gene regulatory networks (GRNs) and cellular interactions that drive organogenesis, which are a focus of our research. One property of self-regulation is robustness against genetic perturbations. Despite congenital malformations being a major cause of infant death, they are relatively rare considering the vast number of genes required for embryogenesis. A paradigm to study genetic robustness is the regulation of gene expression by cis-regulatory modules (CRMs) embedded in genomic landscapes. We have shown that Gremlin1 (Grem1) mediated BMP antagonism is pivotal to mouse organogenesis and its dynamic regulation in limb buds defines a key node in the self-regulatory signaling system controlling its development. The large Grem1 genomic landscape encodes the eight CRMs that orchestrate the Grem1 expression dynamics during limb bud development. These CRMs were functionally studied by reverse genetics using CRISPR/Cas9 genome editing in the mouse. While single CRM deletions did not alter limb development, deletion of all eight CRMs reproduces the Grem1 null phenotype. Combinatorial analysis uncovered the complex cis-regulatory logics and robustness of the dynamic Grem1 regulation during mouse limb bud development. We establish that these CRMs regulate Grem1 transcript levels in an additive manner while its spatial regulation depends on enhancer cooperativity. The latter provides Grem1 expression and digit development with cis-regulatory robustness as spatial alterations are the cause of digit fusions and loss. The observed phenotypes are very reminiscent of the changes in digit patterns that occurred during evolutionary diversification of mammalian limbs. Indeed, we discover that the Grem1 cis-regulatory landscape is evolutionary ancient and experimental evidence indicates that it provided the cis-regulatory plasticity for limb skeletal diversification during evolution. Two of the CRM enhancers are conserved from basal fishes to mammals and transgenic analysis reveals the substantial plasticity in their species-specific activities, which also provides insights into the molecular alterations underlying the fin-to-limb transition.

Another focus is the cellular analysis of the mechanisms controlling progenitor cell proliferation and specification in mouse limb buds. We initiated this analysis as little was known about the origin and molecular signatures of the limb bud mesenchymal progenitors (LMPs) that give rise to the chondrogenic primordia of the appendicular skeleton. The combination of flow cytometric analysis with transcription profiling revealed the molecular profiles of LMPs in limb buds. In particular, this analysis identified the most immature LMPs in early limb buds as Jagged1 (JAG1) positive cells located in the posteriordistal mesenchyme. The transcription profile of JAG1-positive LMPs and their functional manipulation in culture shows that they depend critically on morphogenetic SHH and FGF signaling. In particular, JAG1-positive LMPs are protected from apoptosis by GREM1-mediated BMP antagonism. This shows that the proliferation and survival LMPs in the distal limb bud mesenchyme is controlled by the SHH/GREM1/AER-FGF signaling system. At the same limb bud stage, the osteochondrogenic progenitors located in the core mesenchyme are already actively responding to BMP signaling, which induces their chondrogenic differentiation. This analysis identified the different LMP populations in early mouse limb buds and uncovers the spatially distinct response of cells to patterning, proliferation and differentiation signals.

These studies are complemented by cell sorting in combination with single cell RNA-seq and chromatin analysis to analyze GRN interactions in limb buds at cellular resolution. Finally, we use in depth bioinformatic analysis and simulations of mouse and chicken limb bud development to identify the shared and species-specific GRN interactions governing limb bud patterning and outgrowth. 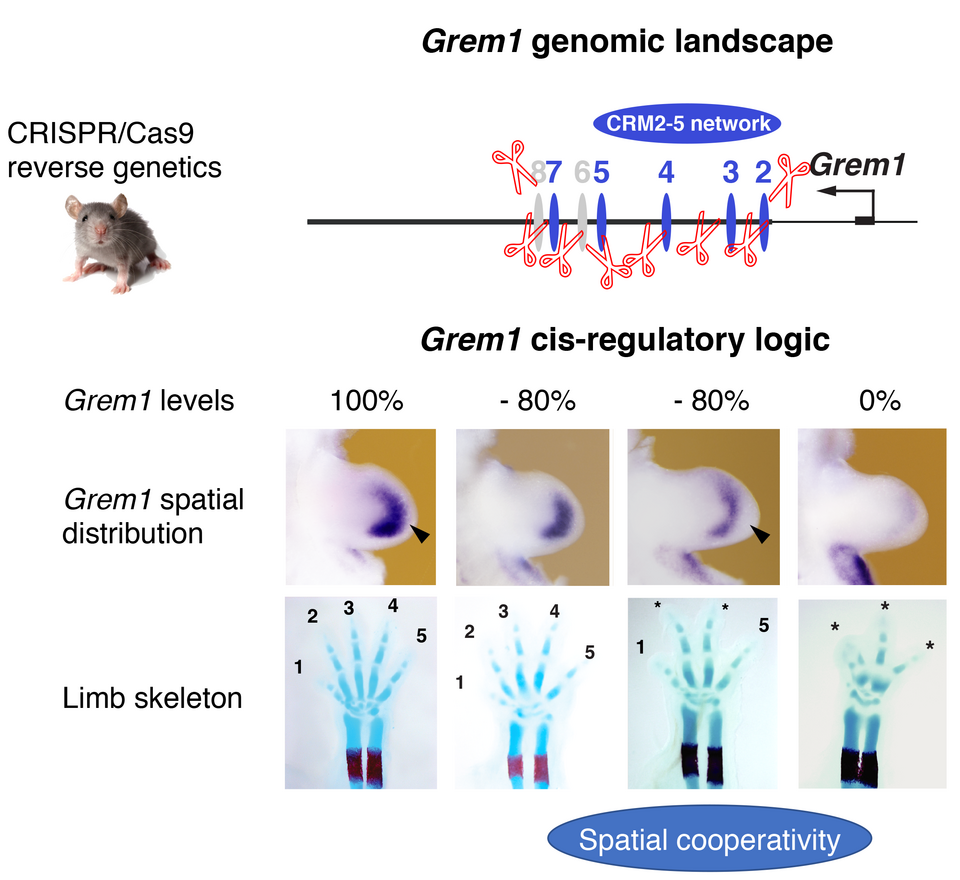 Fig. 1: Analysis of the Grem1 cis-regulatory landscape by CRISPR/Cas) genome editing in mice. In the Grem1 genomic landscape (upper scheme) an array of eight CRM was identified, several of which display strong enhancer activities in transgenic mouse limb buds (indicated in blue. The combinatorial analysis of these enhancers showed that CRM2-5 form an enhancer network that regulate Grem1 transcript levels in an additive and the spatial expression dynamics in a cooperative manner. Strikingly an 80 % reduction in Grem1 levels results in no digit phenotypes when the asymmetric spatial expression is maintained (lower panel). Only when this spatial cooperativity is broken – i. e. the expression becomes symmetric digit numbers are reduced and middle digits loose their asymmetry. Arrowheads indicate the wild-type and symmetric Grem1 expression domains, asterisks digits with phenotypes. 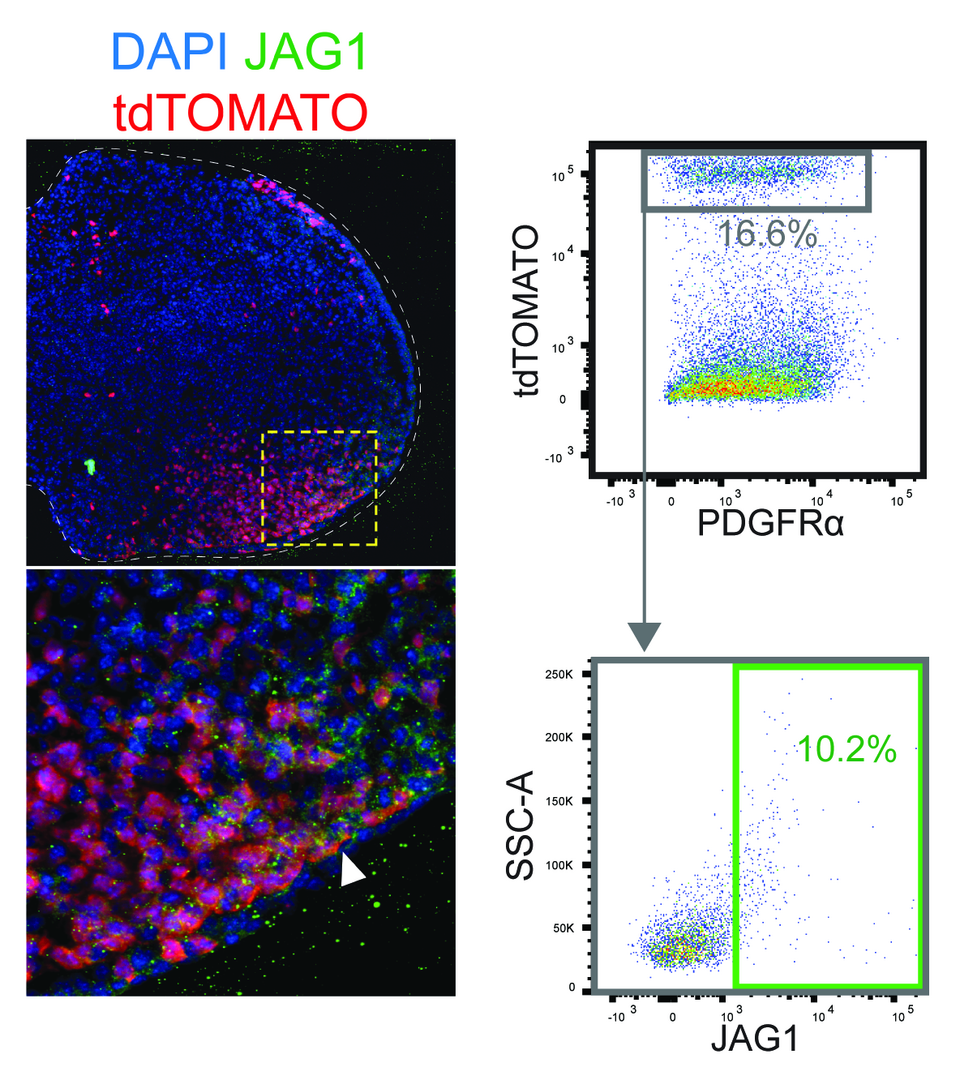 Fig. 2: Mapping LMPs and their descendants in mouse limb buds. Distribution of Shh-expressing cells (Shh-GFP, white arrowheads indicate the distal border) and tdTOMATO positive Shh descendants in a mouse forelimb bud (E10.5–E10.75). This pattern arose from permanent activation of the Rosa26tdTomato transgene by ShhGFPCreinduced recombination. The JAG1-positive LMPs are detected by specific antibodies. The overlap shows that only a small fraction of cells coexpress tdTOMATO (red) and JAG1 (green). White dashed lines outline the limb buds. Yellow dashed lines demarcate the regions enlarged in the lower panel. FACS analysis confirmed that about 10 % of the tdTOMATO-positive LMPs coexpress JAG1.