The signaling repertoire of G-protein coupled receptors (GPCRs) in the central nervous system is expanded through interaction with trafficking, effector and regulatory proteins that constitute stable multi-protein receptor complexes of distinct composition and localization. We have started to deconstruct and reconstruct GPCR complexes in native and recombinant expression systems to address how the composition of such complexes influences fundamental processes such as neuronal excitability and network oscillations. Our ultimate goal is to identify novel drug targets for the treatment of neurological and psychiatric diseases.

GABAB receptors
GABAB receptors are the GPCRs for the inhibitory neurotransmitter γ-aminobutyricacid (GABA). GABAB receptors have been implicated in a variety of neurological and psychiatric conditions, including epilepsy, essential tremor, anxiety, depression, schizophrenia, bipolar disorder, addiction and pain. Despite the involvement of GABAB receptors in mental health disorders, the clinical use of GABAB receptor drugs is currently limited to agonists and the treatment of narcolepsy, neuropathic pain, spasticity and dystonia. One reason for this is that the main therapeutic effect of baclofen - muscle relaxation - is an unwanted side effect for mental health indications.A large body of work supports that native GABAB receptors vary in their kinetic and signaling properties. To some extent, this may be explained by receptor-associated proteins. In collaboration with B. Fakler (Freiburg i Br) we purified native GABAB receptor complexes and identified ~30 constituents using tandem massspectrometry (Schwenk et al., Nature Neurosci., 2016). We found that GABAB receptors not only comprise principal GABAB1 and GABAB2 subunits but also four auxiliary KCTD subunits. These auxiliary subunits regulate the kinetics of the receptor response and influence circadian rhythmicity and emotions in behaving mice (Turecek et al., Neuron, 2014; Cathomen et al., Transl. Psychiatry, 2016). Principal and auxiliary receptors subunits, together with the heterotrimeric G-protein, can be viewed as the core building blocks of receptors. Peripheral building block can bind to these core building blocks and assemble into receptor complexes with unique properties. Peripheral building blocks comprise effector channels, elements of the presynaptic release machinery and proteins that regulate receptor localization. For example, we identified HCN channels (Schwenk et al., Nature Neurosci., 2016) and TRPV1 channels (Hanack et al., Cell, 2016; collaboration with J. Siemens, Heidelberg) as novel effector channels of GABAB receptors. Together with H. Bräuner-Osborne (Copenhagen), a medicinal chemist, we are currently developing synthetic compounds that interfere with defined receptor complexes. These compounds will be tested for their therapeutic potential in psychiatric indications. Possible advantages of such compounds  include a reduction in side effects as well as entirely new therapeutic applications.

mGlu5 Receptors
In collaboration with L. Lindemann (Roche, Basle) we have identified mGlu5 receptor-associated proteins. We are currently characterizing the newly identified proteins for their effects on mGlu5 receptor functions in vitro and in vivo 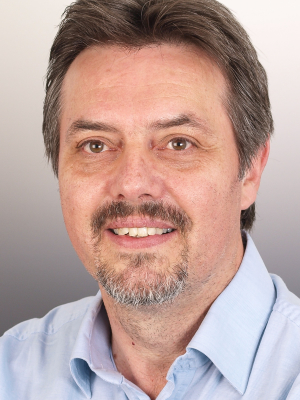 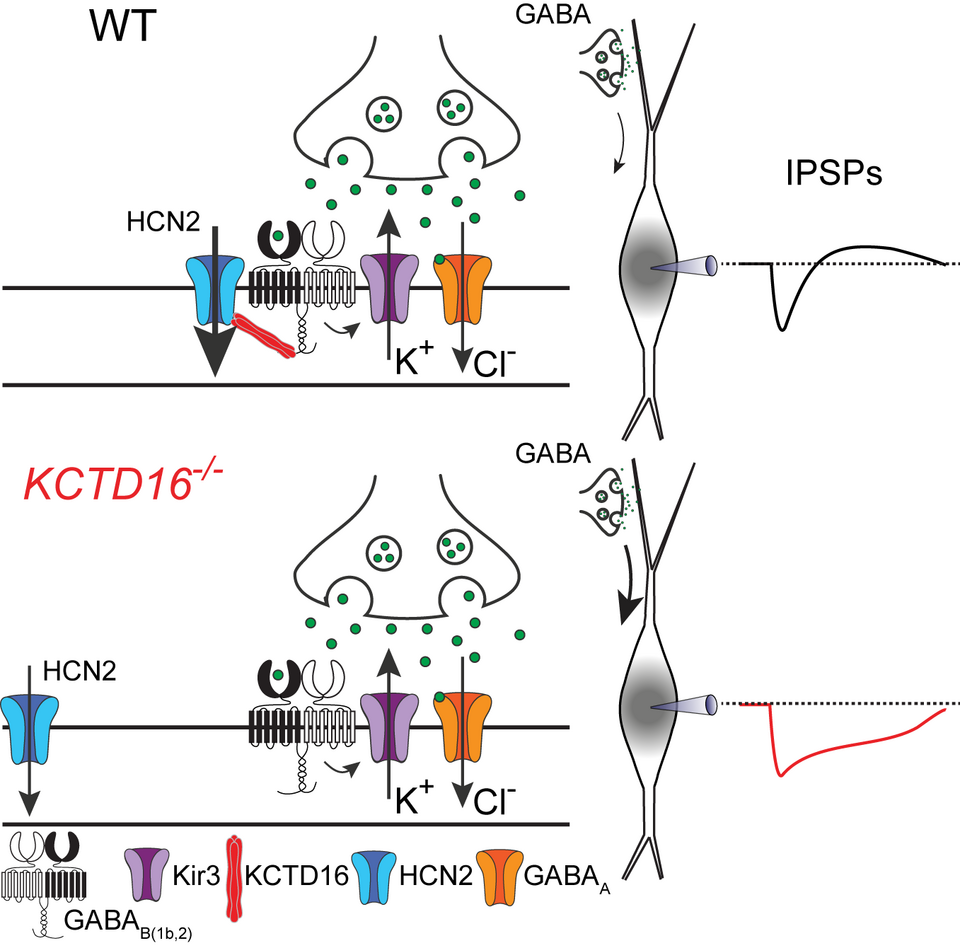 Fig. 1: Scheme depicting the functional consequences of the association of GABAB receptors and hyperpolarization-activated cyclic nucleotide-gated HCN2 channels in WT but not in KCTD16-/- dopaminergic neurons. Proximity of HCN2 channels and GABAB receptors at the postsynapse of GABAergic synapses in WT neurons facilitates activation of HCN2 channels by hyperpolarizing GABA-mediated IPSPs (induced by GABAB receptor-activated Kir3-type K+ channels and GABAA Cl- channels). Activated HCN2 channels introduce an additional shunt in the membrane that interferes with propagation of IPSPs to the soma of dopaminergic neurons (indicated with a weak arrow). In KCTD16-/- neurons HCN2 channels are dissociated from receptors and their effector Kir3 channels, which removes HCN2 channels from the hyperpolarizing influence of IPSPs. A drift of the HCN2 channels to more distal dendritic locations, relative to the postsynapse, results in stronger signal propagation and larger IPSPs at the soma (indicated with a strong arrow). Adapted from Schwenk et al., Nature Neurosci. 19, 2016.