Synaptic integration of young neurons into the adult hippocampus

The hippocampal formation within the medial temporal lobe of the cerebral cortexis essential for our conscious memory for facts and events. Remarkably, the hippocampusis one of the very few regions in the adult mammalian CNS, where new neurons are continuously generated throughout life. This indicates that the new neurons are involved in learning and formation of new memories. However, the underlying mechanisms are still poorly understood.
During the last three years (2014-2016) we have investigated the regulation of adult neurogenesis on a cellular and behavioural level, and investigated the effects of enhanced neurogenesis on learning and memory in adult mice. Within the hippocampus, neurogenesis is restricted to granule cells in the dentate gyrus (Figure 1). Adult neural stem cells (green) give rise to transit amplifying cells (yellow) generating postmitotic neuroblasts which subsequently differentiate into young neurons(red). During the following ~6 weeks, they form new dendrites and several thousand new synaptic connections within the adult hippocampal network.
We investigated the properties of the first GABAergic and glutamatergic synapses which sequentially appear a few days and about 2 weeks post mitosis, respectively(Heigele et al. 2016, Fig. 1). To investigate adult neurogenesis, we have used an oncoretrovirus which inserts into the DNA of dividing cells to label newly generated neurons with GFP which enables analysis of the young cells in hippocampal brain slices. As a second approach, we use transgenic mice expressing the redfluorescent protein DsRed under the control of doublecortin (DCX-DsRed) which is expressed in young neurons for about 3 weeks post mitosis (Fig. 2).
Although GABA is an inhibitory transmitter in the adult brain, we have shown that GABA is depolarizing (EGABA= -35 mV) in the newborn neurons for a period of about 3 weeks (Heigele et al. 2016). After 3 weeks the GABA reversal potential shifts to more negative values close to the granule cells resting potential to finally act inhibitory in mature neurons. As glutamatergic synapses are very sparse and inefficient until about 3 weeks post mitosis it was believed that the young neurons do not fire synaptically evoked action potentials (APs). Remarkably, we could show that depolarizing GABAergic synapses can evoke or inhibit APs in the young cells, dependent on the number of active presynaptic GABAergic interneurons. Low GABAergic conductances (1-2 nS) corresponding to about 3-4 interneurons,reliably evoked action potentials. By contrast, when more than 30 % of the synaptically connected interneurons were active (> 4 nS), spiking was blocked via shunting inhibition. Therefore, moderate interneuron activity could activate young neurons and thereby promote functional maturation and synaptic integration of the young cells.

In a second project we have studied the formation of new glutamatergic synapses at 2-4 weeks post mitosis and its regulation by local astrocytes in collaboration with Nicolas Toni (Sultan et al. 2015). Astrocytes release D-serine in an activity-dependent manner, which is an important cofactor to activate synaptic and extrasynaptic NMDA receptors, abundantly expressed in the young neurons during the period of synapse formation (Schmidt-Salzmann et al. 2014). Therefore, astrocytes are critically important to regulate new synapse formation in an activity dependent manner.
It is well known that physical activity is associated with hippocampal network activity. Therefore, we investigated the consequences of 2-3 weeks of voluntary wheel running in adult mice (Figure 3, Bolz et al. 2016). We studied the number of newborn neurons and episodic memory using a "novel object recognition task". Furthermore, we have used different types of objects which were either very similar or highly distinct to each other. Whereas both, control and running mice could remember different distinct objects after the 24h delay period, only the running mice could faithfully recognize the different similar objects (Figure 3D), indicating that increased neurogenesis is in particular important for distinction of similar memory items during memory recall. 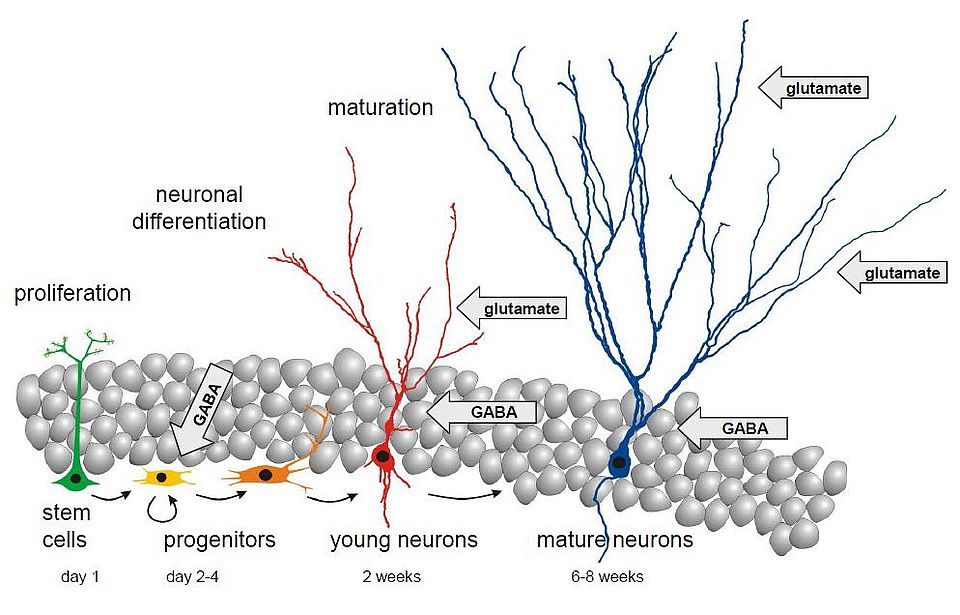 Fig. 1: Adult neurogenesis in the hippocampus. Adult neural stem cells are localized within the subgranular zone of the hippocampus to generate neural progenitors and thereby postmitotic neurons. During a period of about 6–8 weeks the surviving neurons form thousands of new GABAergic and glutamatergic synaptic contacts and fully integrate into the mature hippocampal network. 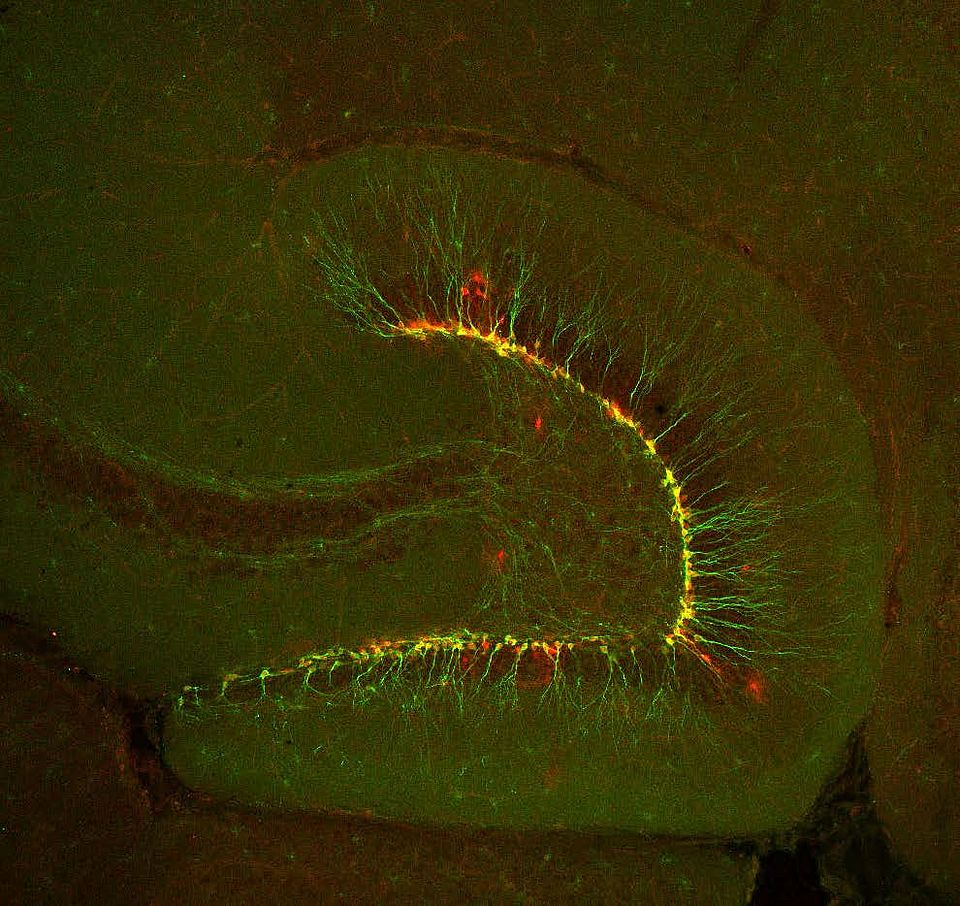 Fig. 2: Newborn neurons in adult mice. A horizontal hippocampal brain slice was prepared from a 2-month-old transgenic mouse expressing the red fluorescent protein DsRed und the control of the doublecortin (DCX) promotor, labeling young neurons form 1–3 weeks post mitosis. Newborn granule cells are localized within the inner border of the granule cell layer. Whereas DsRed is localized in the soma (red), the DCX protein is distributed along soma, dendrites and axons shown by immunolabelling (green). Neurogenesis was increased by keeping animals for 2–3 weeks in cages with running wheels (see Fig. 3). 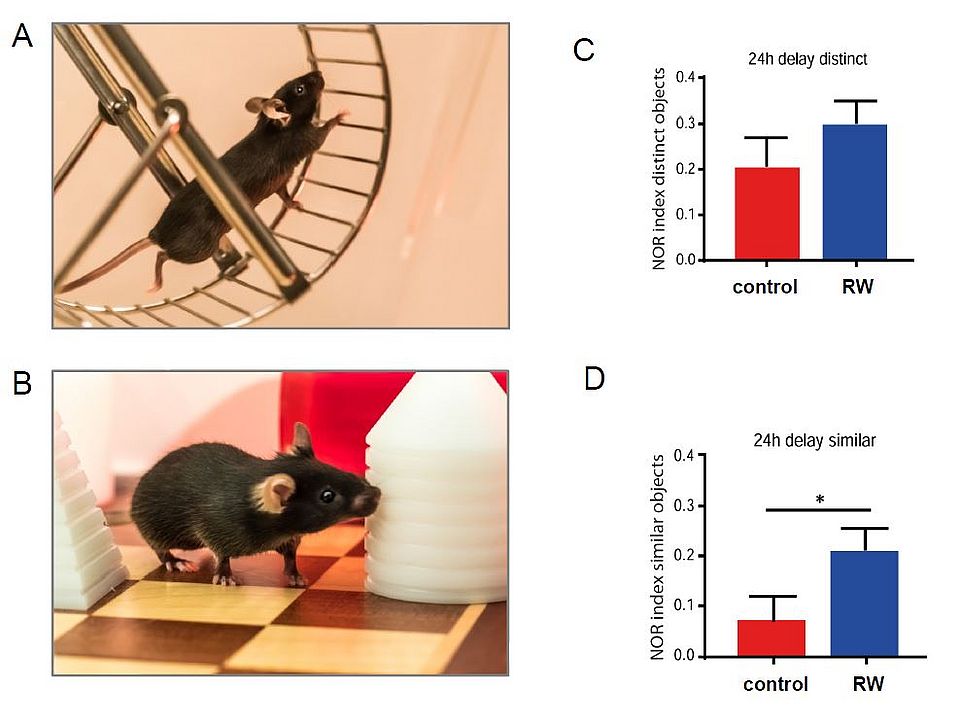 Fig. 3: Running increase pattern separation during novel object recognition. (A) Adult mice were kept either in control cages (control) or in cages with running wheels (RW) for 2–3 weeks. (B) Afterwards, the animals had to recognize and distinguish previously explored familiar and novel objects. (C) Both, running and control mice could recognize different distinct objects, briefly explored 24h before. (D) Only running mice (RW), however, could reliably recognize different similar objects. Recognition was measured as differential exploration time, quantified as “novel object recognition” (NOR) index.