In the last decade, we have gained substantial knowledge on the function of innate lymphoid cells (ILCs), a group of immune cells, which immediately respond to “danger signals” with the release of cytokines. They protect mucosal surfaces in the gut and lung, but are also involved in diseases such as inflammatory bowel disease, asthma and cancer. Our previous research has shed light on how ILCs were regulated by environmental cytokines. More recent work has demonstrated that ILC3s have tissue-restricted properties and a metastable transcriptional signature. The identification of molecular pathways that regulate ILC differentiation and function is essential for a better understanding of how ILCs contribute to protective or pathological responses.
ILCs, unlike adaptive lymphocytes do not express variable antigen receptors that serve as master activators in T and B cells. Instead ILCs sense the environment by a concerted action of surface molecules, and the outcome of ILC responses depend on the integration and cooperation of different downstream signaling pathways. We defined a new role of NKp46, an activating receptor expressed by all ILC1s and a subset of ILC3s. We found that the expression of TRAIL, a TNF superfamily member with known tumoricidal function, depends on NKp46. Lack of NKp46 lead to the reduction of normal levels of TRAIL expression on the surface of  lLCs. The reduced cytotoxic potential of NKp46-deficient ILC1s towards TRAIL-receptor positive targets provide an additional role for NKp46 in tumor surveillance. Another focus of our research is the regulation of T-cell immune responses by group 3 ILCs. Tissue-specific factors regulate the expression of transcripts associated with MHC class II antigen presentation in ILC3s. Splenic ILC3s are relatively efficient antigen presenting cells, whereas ILC3s of the small intestine are poor in presenting antigen and stimulating T cells. We identified tissue specific signaling cascades that affect the antigen presentation by ILC3s. The intestinal microbiota induces the release of IL-23 by myeloid cells, which silences the expression of MHC class II in ILC3s, thereby reducing their capacity to present antigen. Moreover, mTORC1 and STAT3 phosphorylation are part of the IL-23-signaling cascade responsible for downregulation of MHC class II (Figure 1). Altogether this might be essential to maintain immunological tolerance at barrier tissues like the intestine. In contrast in the spleen IFN-gamma induces the expression of MHC class II molecules, thereby increasing the antigen presenting capacity of ILC3. Both signaling cascades might be relevant to balance T-cell tolerance and immune reaction by affecting antigen presentation by ILC3s. Our current interest is to better under-stand the tissue-specific sub-localization and the cellular interaction of ILC3s with the adaptive immune system.
In a third line of research, we investigate ILC development. ILCs like all hematopoietic cells develop from hematopoietic stem cells. However, the sequence of developmental stages and molecular events that lead to the generation of ILC- committed progenitors as well as the exact identity of such cells remains poorly defined. Using a systemic approach including single cell molecular and bioinformatical analysis, we are able to reconstruct developmental trajectories from a hematopoietic stem cell into an ILC progenitor or alternative developmental lineages. With a comprehensive molecular map of developmental transitions that result in the generation of a committed ILC progenitor we are now dissecting the role of individual genes and signaling pathways that control ILC lineage specification. 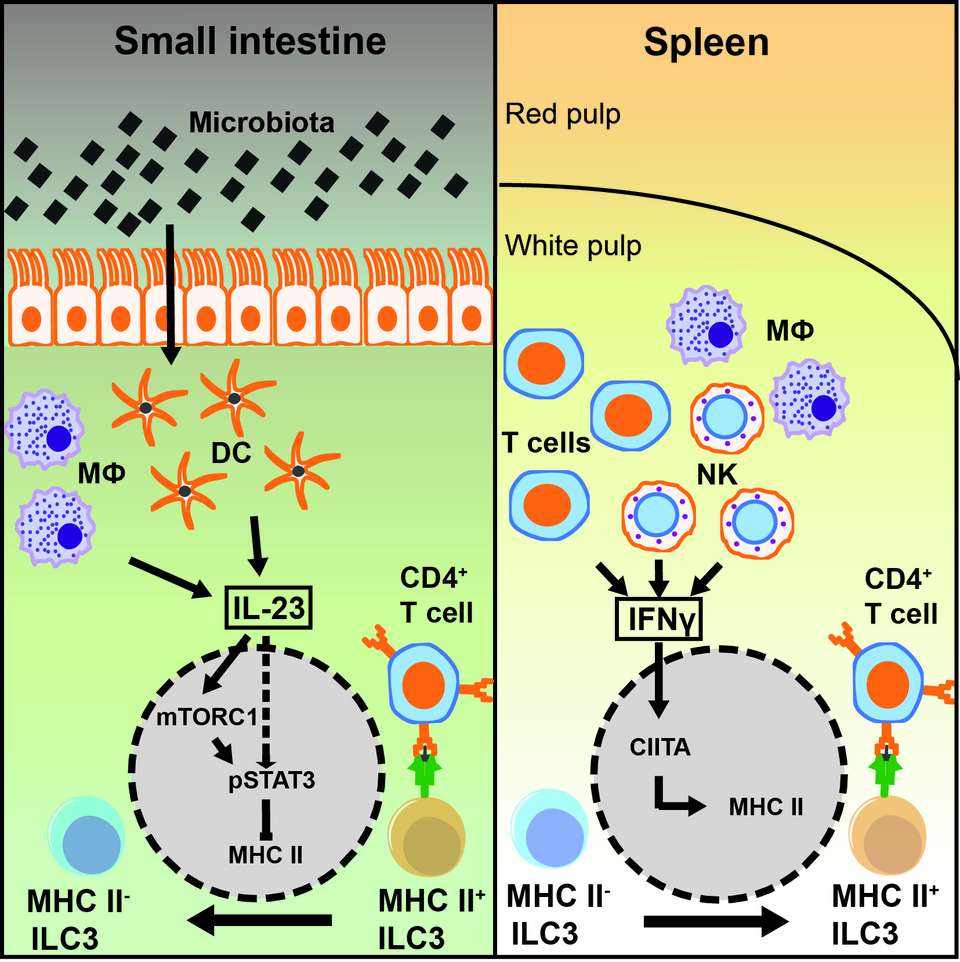