The cerebellum is a part of the brain which is involved in many neural functions, in particular when precision in time and space is required. This is of course the case for movements and a functional deficit of the cerebellum becomes usually evident in the form of unprecise movements, called an ataxia. Purkinje cells are the principal cells of the cerebellar cortex and have a large and highly branched dendritic tree (Fig. 1). A large and heterogeneous group of hereditary diseases called spinocerebellar ataxias is caused by dysfunction and death of Purkinje cells.
Our laboratory has a long-standing interest in the molecules and mechanisms regulating growth and development of Purkinje cell dendrites. We have identified Protein Kinase C (PKC) activity as a major regulator of Purkinje cell dendritic growth and have shown that PKC activity via the intracellular calcium concentration regulates the shape and size of the Purkinje cell dendritic tree. The predominant subtype of PKC in Purkinje cells, PKCγ, is also linked to one form of the spinocerebellar ataxias, SCA-14, which is caused by point mutations or deletions in the PKCγ gene. The mechanisms by which the mutations in the PKCγ gene lead to Purkinje cell dysfunction and death in SCA-14 are still not known. This is an important question because SCA14 can be viewed as a model for neurodegenerative diseases and understanding the mechanisms in SCA14 may also help understanding neurodegeneration in general. Our group is studying in which ways PKCγ may contribute to the pathogenesis of SCA and how this may be related to its effects on dendritic growth. We have generated a transgenic mouse model with a point mutation found in some SCA-14 patients which is located in the catalytic domain of PKCγ (PKCγ-S361G). We could show that the presence of the mutated protein in mouse Purkinje cells induces a striking reduction of Purkinje cell dendritic outgrowth. A similar effect is seen when PKC is stimulated with pharmacological agonists indicating that the mutated protein has increased kinase activity and is biologically active in Purkinje cells (Fig. 2). The finding of a strongly reduced dendritic growth caused by a mutation from spinocerebellar ataxia has also linked the disturbance of dendritic development of Purkinje cells to the pathogenesis of spinocerebellar ataxias. In a new mouse model, we have introduced a point mutation which keeps PKCγ in an open active conformation with increased activity also causing dendritic reduction of Purkinje cells (Fig. 2). This mouse model will allow us to better study the contribution of PKC activity to the pathogenesis of SCAs.
The Purkinje cell-specific expression of the S361G mutation has allowed us to use this this mouse model for identifying molecules which are transcriptionally regulated in Purkinje cells carrying this mutation and which might be involved in the signaling mechanisms eventually resulting in the reduction of dendritic growth. As a first candidate molecule, we have identified Car8 as a potential mediator of PKC signaling. Further work in our group has now identified more potential candidate molecules which have an altered expression in S361G Purkinje cells, and which might interact directly or indirectly with PKCγ. These molecules are linked to PKCγ signaling and include the IP3 receptor 1 (IP3R1), the Collapsin response mediator protein 2 (CRMP2), the Regulator of G-Protein Signaling 8 (RGS8) and the serine/threonine kinase 17b (STK17b, also known as DRAK2). We know for all of the mentioned candidate molecules that they are expressed in Purkinje cells and that their expression is changed in the S361G mouse model.
A major goal of our group is to better define the interaction of these molecules with PKCγ and better characterize their role for PKC signaling, Purkinje cell dendritic development and Purkinje cell dysfunction in spinocerebellar ataxia. Our studies aim at a better understanding of the role of PKCγ signaling for Purkinje cell dendritic development and for dysfunction in spinocerebellar ataxia as the basis for developing novel therapeutic strategies for cerebellar diseases. 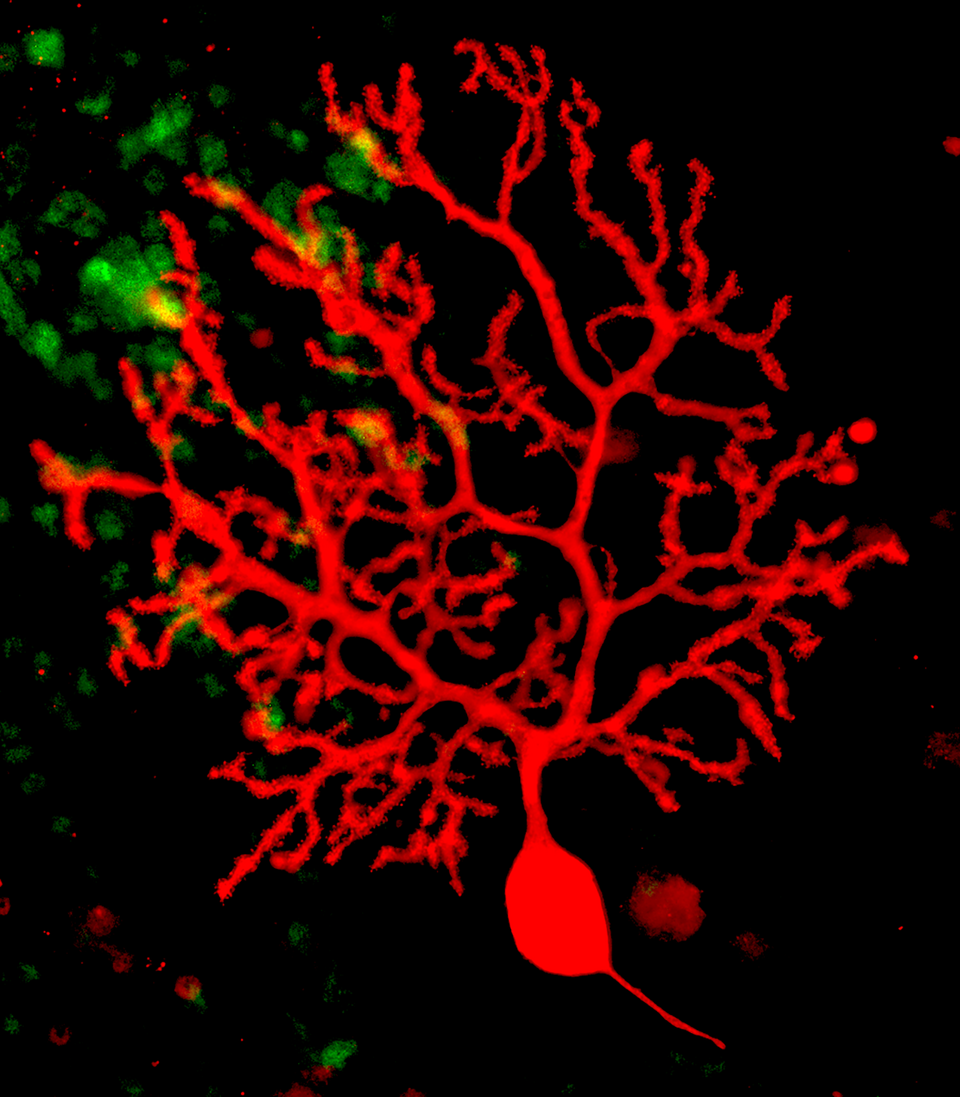 Fig. 1: View of a Purkinje cell in an organotypic slice culture after 12d in vitro. Anti-calbindin staining for Purkinje cells is shown in red. The elaborate dendritic tree of this cell has developed almost entirely during the culture period. 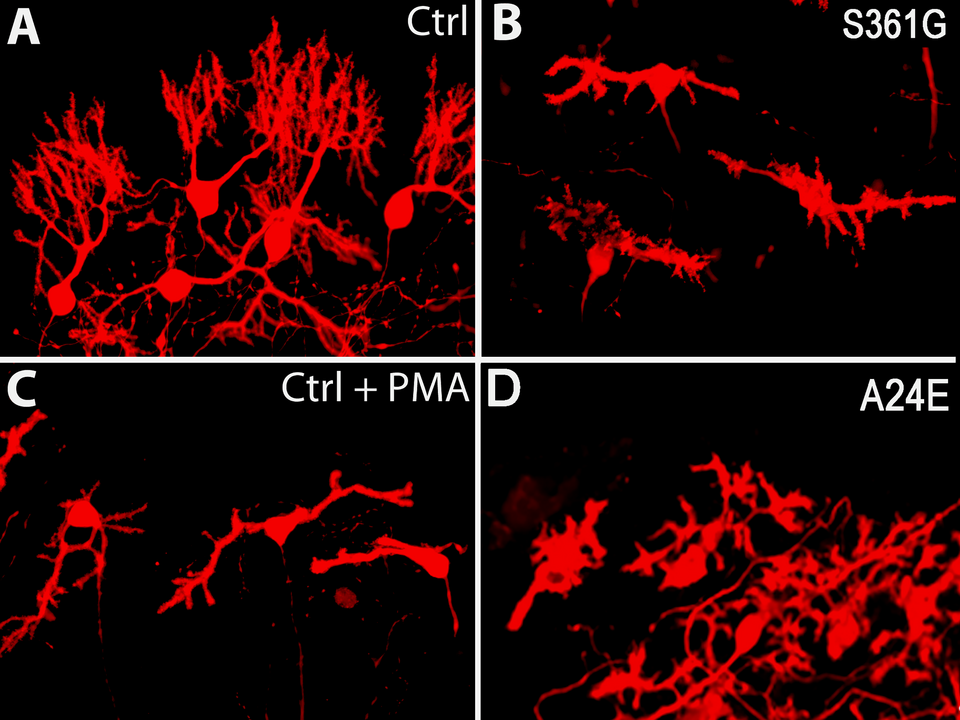 Fig. 2: The Purkinje cell dendritic tree in slice cultures derived from mice with transgenic expression of a mutated PKCγ-S361G from SCA14 (B) is severely compromised compared to control (A) and resembles strongly that of Purkinje cell with pharmacological activation of PKCγ (C). The morphology of Purkinje cells from slice cultures of a new mouse model with a mutation in the pseudosubstrate domain PKCγ-A24E keeping PKCγ in the open active conformation again resembles that of activated PKCγ (D).