Molecular Mechanisms of Myelin Formation and Maintenance in Health and Disease

Oligodendrocytes are the myelinating cells of the central nervous system. Their main function is to insulate axons to enable saltatory conduction. They further support neurons by providing continuous metabolic and trophic support. To fulfill these tasks oligodendrocytes maintain up to 50 single myelin sheaths supporting many axons at a time.
Oligodendrocytes derive from the neuroectoderm and are the last neural cells differentiating during development. Oligodendrocyte precursor cells (OPCs) proliferate,migrate and finally contact axons which they ultimately myelinate. This process is tightly controlled not only by a complex intrinsic oligodendrocyte differentiation program, but also by external reciprocal signaling processes such as the degree of neuronal differentiation. Due to their complex architecture and high metabolic demands, oligodendrocyte function can be easily disturbed; because of that they are often referred to as “the most vulnerable cells of the CNS”. This is especially unfortunate in the case of disturbances of brain homeostasis. Many events can lead to such disturbances; among them inflammatory pathomechanisms of the CNS such as in Multiple Sclerosis (MS). In the context of inflammation, oligodendrocytes are generally believed to be simply victims of the inflammatory reaction, being lucky they survive. However, this view is probably too simple, and an increasing body of evidence demonstrates that oligodendrocytes can react and/or act if challenged by immune reactions (Fig. 1, Zeis and Schaeren-Wiemers, 2008). They express various cytokines and chemokines, antigen presenting molecules and co-stimulatory molecules, complement and complement receptor molecules, complement regulatory molecules, tetraspanins, neuroimmune regulatory proteins as well as extracellular matrix proteins and many others. Their potential immunomodulatory properties can, at specific times and locations, influence ongoing immune processes as shown by numerous publications. Therefore, oligodendrocytes are well capable of immunomodulation, especially during the initiation or resolution of immune processes in which subtle signaling might tip the scale. A better understanding of the immunomodulatory oligodendrocyte can help to invent new, innovative therapeutic interventions in various diseases such as Multiple Sclerosis. These potential immunomodulatory features of oligodendrocytes are the topic of a recent review (Zeis et al., Brain Research 2016).

Emerging as an important correlate of neurological dysfunction in MS, extended focal and diffuse gray matter abnormalities have been found and linked to clinical manifestations such as seizures, fatigue and cognitive dysfunction. To investigate possible underlying mechanisms we analyzed the molecular alterations in histopathological normal appearing cortical gray matter (NAGM) in MS. By performing a differential gene expression analysis of NAGM of control and MS cases we identified reduced transcription of astrocyte specific genes involved in the astrocyte-neuron lactate shuttle (ANLS) and the glutamate-glutamine cycle(GGC) (Fig. 2). Additional quantitative immunohistochemical analysis demonstrating a CX43 loss in MS NAGM confirmed a crucial involvement of astrocytes and emphasizes their importance in MS pathogenesis. Concurrently, a Toll-like/IL-1β signaling expression signature was detected in MS NAGM, indicating that immune-related signaling might be responsible for the downregulation of ANLS and GGC gene expression in MS NAGM. Indeed, challenging astrocytes with immune stimuli such as IL-1β and LPS reduced their ANLS and GGC gene expression in vitro. The detected upregulation of IL-1β in MS NAGM suggests inflammasome priming. For this reason, astrocyte cultures were treated with ATP and ATP/LPS as for inflammasome activation. This treatment led to a reduction of ANLS and GGC gene expression in a comparable manner. To investigate potential sources for ANLS and GGC downregulation in MS NAGM, we first performed an adjuvant driven stimulation of the peripheral immune system in C57Bl/6 mice in vivo. This led to similar gene expression changes in spinal cord demonstrating that peripheral immune signals might be one source for astrocytic gene expression changes in the brain. IL-1β upregulation in MS NAGM itself points to a possible endogenous signaling process leading to ANLS and GGC downregulation. This is supported by our findings that, among others, MS NAGM astrocytes express inflammasome components and that astrocytes are capable to release Il-1β in vitro. Altogether, our data suggests that immune signaling of immune- and/or central nervous system origin drives alterations in astrocytic ANLS and GGC gene regulation in the MS NAGM. Such a mechanism might underlie cortical brain dysfunctions frequently encountered in MS patients (Zeis et al., BBI 2015). 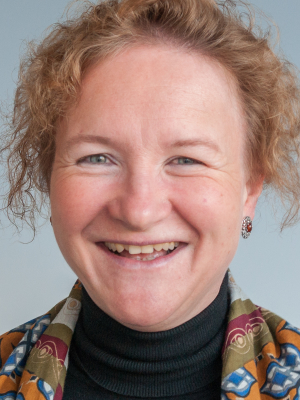 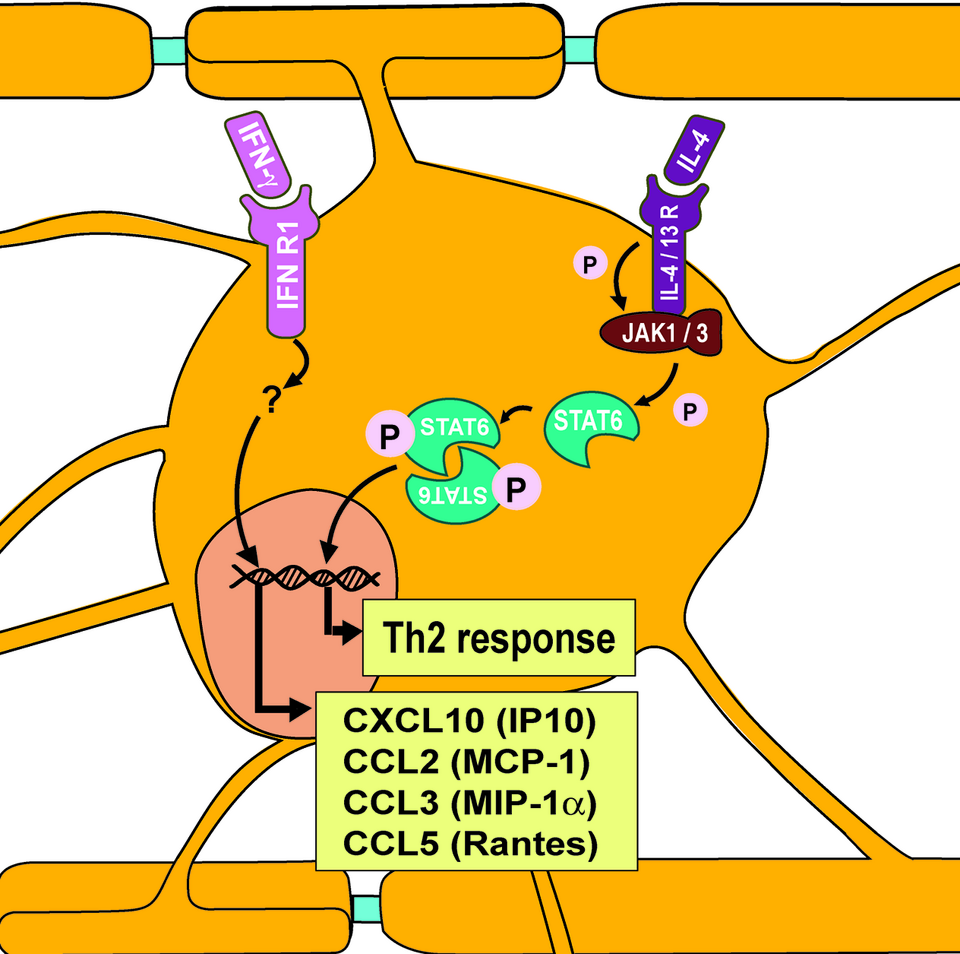 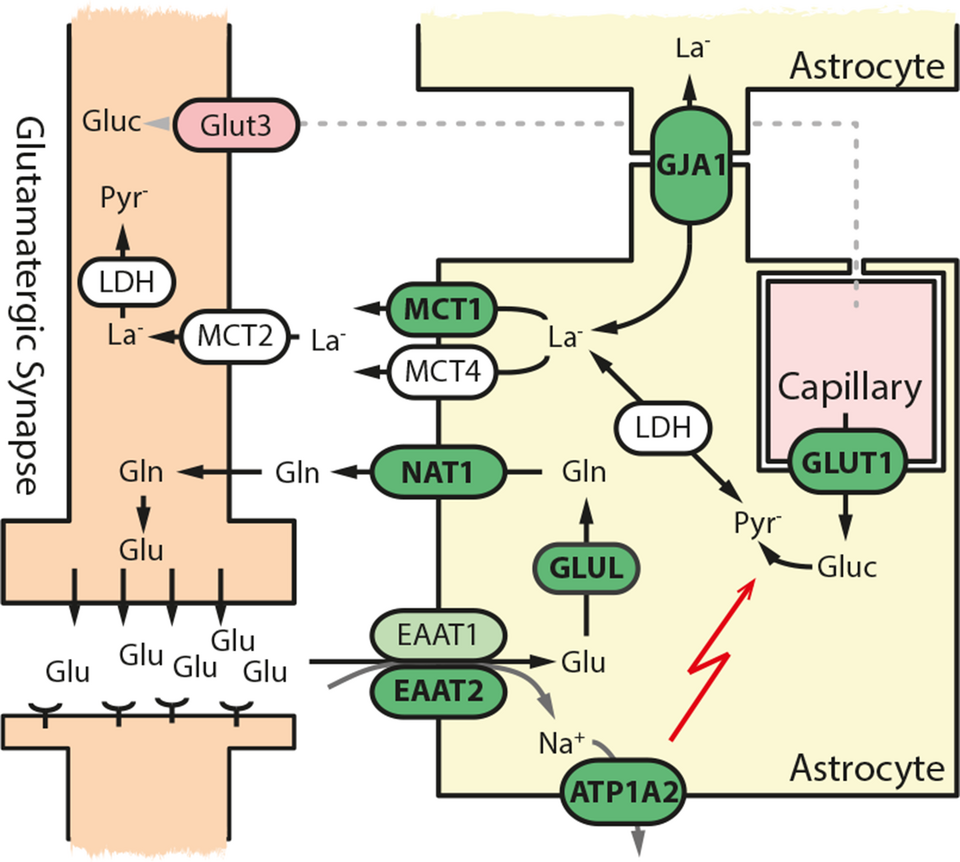 Fig. 2: Differential gene expression in normal appearing cortical gray matter of chronic MS. Schematic drawing of genes belonging to the ANLS and GGC. This model includes the following sequence of molecular events: Following increased synaptic activity glutamatergic neurons release the neurotransmitter glutamate into the synaptic cleft. Glutamate is avidly taken up by the astrocytes surrounding the synaptic cleft, via specific glial glutamate transporters (EAAT1 and EAAT2). EAATs co-transport glutamate with sodium ions increasing intracellular sodium concentration in the astrocyte and activating the energy dependent Na+/K+ ATPase pump (through the recruitment of the alpha 2 subunit). The corresponding hydrolysis of ATP leads to activation of astrocytic glycolysis, i.e. the degradation of glucose to pyruvate, which is then converted to lactate via lactate dehydrogenase (LDH). Lactate is then released via astrocytic monocarboxylate transporters (MCT1 and 4) into the extracellular space and from there taken up by the neurons (via MCT2). In neurons it serves as an energy substrate following its intracellular conversion to pyruvate by LDH. Genes which were found by qRTPCR to be highly significantly (p≤0.001) downregulated in MS NAGM are shown in dark green (in bold), genes with a higher p-value showing a tendency to be downregulated are shown in light green. Genes showing a tendency to be upregulated are shown in light red. Red bolt indicates coupling of glutamate transport with glucose utilization. Abbreviations: Gluc = Glucose, Pyr-= Pyruvate, La- = Lactate, Glu = Glutamate, Gln = Glutamine.